Saturday morning, 9/10 I left behind the oxygen-rich sea-level air of Baltimore and boarded a plane for Denver.  I got to reunite with Katie (Sunshine Trailbreaker) who had transplanted to the Mile High City a couple of years ago.  She picked me up with her Forester, fresh from the mechanic, and we blazed a trail south out of town.  She had an ambitious plan for us to tackle a 14er.  I've certainly done dumber things, so I was all-in.

Before long, we were through the foothills and into high desert.  We made a detour on the way to satisfy the tourist requirement by checking out The Royal Gorge.  We wandered across the bridge and got snapshots of our home-state’s flag.  All fifty were represented along the railing of the bridge. 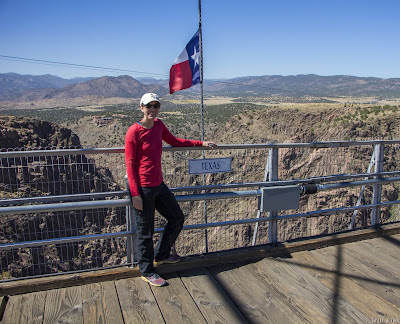 We wanted to get a tram ride back across, but time was short and the queue was long.  We hoofed it back to the car instead, and continued south to Westcliffe.  We rolled into the nearly one-street town and stopped at Chappy’s for a late lunch/early dinner.  This was also our rendezvous with Katie's friend Brian - another recently minted Colorado local.

After stuffing our faces with burgers and mac n’ cheese we were back in Katie's Forester, with Brian on his bike following.  After 15 minutes or so the road turned to gravel, then to a dusty and rocky track.

Supposedly this is called the roughest road in Colorado!  This was Katie's first 4 wheel drive adventure, and she handled it like a champ.  Brian got sick of literally eating our dust and shot ahead, standing up in the saddle to keep control of his bike.

At one point while negotiating a particularly nasty steep climb over rocks, we ended up on three wheels!  This earned Katie a fist bump from passing Blazer and a “Go Subaru!”.

We finished our drive to the South Colony Trailhead at around 10,500 feet, slung our packs, and started climbing into the fading light.  The stars and moon were bright enough to light our way after the sun dipped below the ridge.  Eventually the trail got treacherous enough that we needed our headlamps to keep from stumbling.

We climbed steadily to somewhere above 12k feet to our camp at South Colony Lake.  I was wheezing and gasping for o2, but mostly kept up with the fleet-footed Katie and Brian.  We pitched shelters as soon as we found convenient ground, then immediately climbed into our bags as temps plummeted.

The night dipped into the low 30’s, high 20’s, and crazy wind gusts rocked the trees my hammock was anchored to.  I felt a killer migraine coming on, which I attributed to the stupidity of going from 13 feet of elevation to 12,000ish in about 12 hours, so I popped vitamin I (ibuprofen).

Soon, I started shaking uncontrollably - but wasn't cold in the slightest.  At first I thought it was another symptom of the onset of altitude sickness.  But after thinking for a few minutes, I remembered my first trip to The Tetons...Our second day in, around 10,000 feet, my buddy Peter (aka Towpath or Fiber One) had a hyponatremia attack (lack of salt or electrolytes) while we were bedded down in our shelter.  Our friend Dylan was also with us.  He produced some magic in the form of Clif Shot Bloks.  Gooey gelatin cubes packed with glucose and electrolytes.  Two hits of those and Peter was right as rain.

...I've carried Shot Bloks on every backpacking trip since.  I realized I had been pounding water all day to help cope with the jump in altitude - and barely gotten anything salty or sugary on board. From my hammock I reached into my pack until my fingers found the awesomeness that is the Mountain Berry Shot Blok.  I inhaled three and within a minute the shakes stopped.  Thanks Peter and Dylan!  Vitamin I soon had the headache under control and I was finally able to get some sleep.

I woke up to the surprisingly good sunrise (as we were surrounded by trees), and forced down some breakfast despite my lack of appetite.  Brian and Katie still slumbered.  I gave them a bit more sack time then issued a wake-up call.  No one had slept that well, and heading out into the chill morning was less than thrilling. 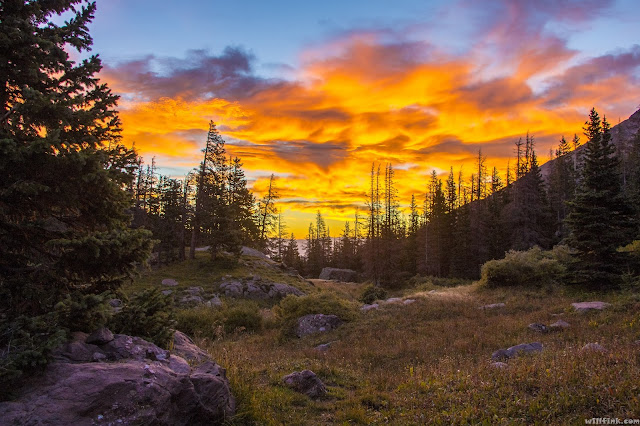 But before long we headed out.  We had a plan to bag either Crestone Peak or Crestone Needle - or both.  Our walk started by passing the South Colony Lakes, then immediately tackling a scree and talus field, followed by the first of the rock scrambles. 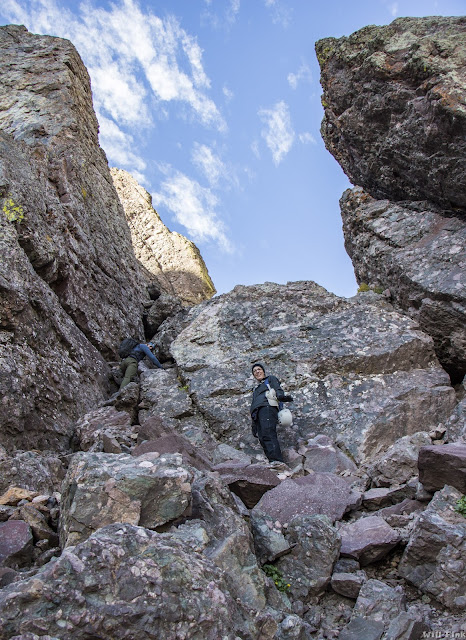 As we approached 13,000 feet - Katie remarked, “Now you'll start to feel the altitude!”  Since I was already wheezing like I had emphysema, that didn't sound good at all.  But I kept climbing gamely on legs that felt weak and squishy. 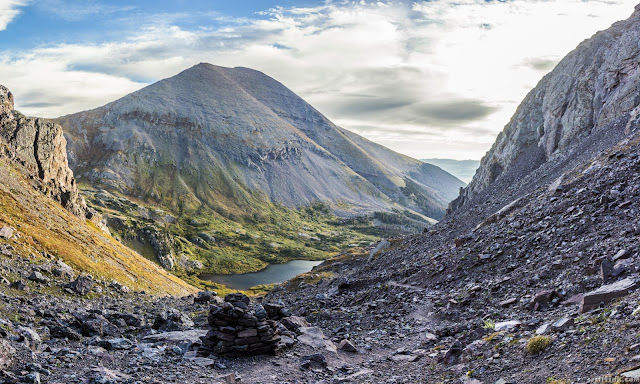 The scrambling became class four, as we decided to go after the Needle first, and then see what time and weather we had to work with.  I felt like a total slug, but the locals seemed impressed that I was there at all after learning I had only been “in country” for less than 24 hours.  I was soon getting greeted by the moniker “Sea-level” as I encountered other climbers. 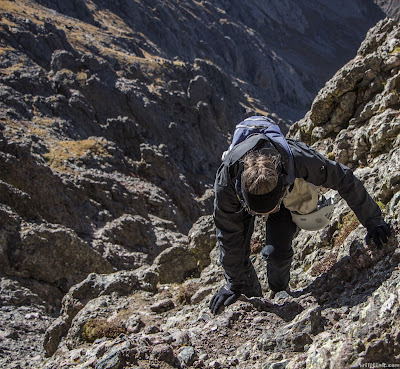 I was happy just to keep my companions in sight.  Katie had become an absolute climbing beast since I had last seen her, and Brian was no slouch either.  The route was unclear at times, but for the most part easy to follow.  Still, it was nice to know I was somewhat on track by viewing other climbers above or below me. 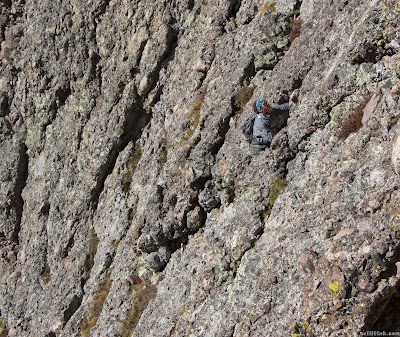 The bulk of the climb to 14,000 feet was accomplished via a sweet sloping rock chute that offered great hand and foot holds.  It wasn't very exposed, so at most a broken hand or foot was at risk.  That wasn't enough for Brian!  So he added on a riskier off-route rock climb, but eventually rejoined us. 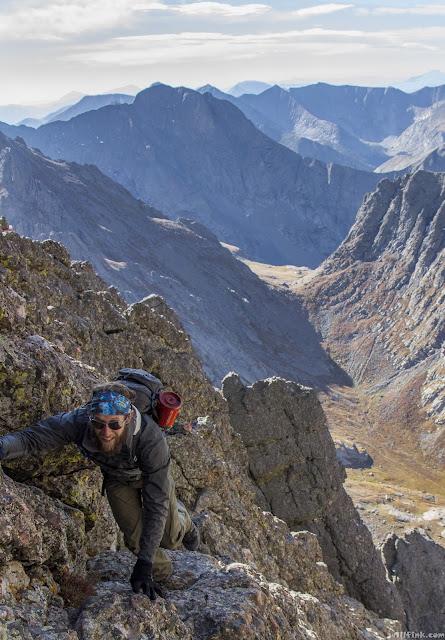 After conquering the chute, there was just one more short climb onto the narrow, jagged peak of Crestone Needle at 14,196 feet.  The highest altitude I had ever climbed, and my first 14er!  I took some pics while Katie and Brian made summit coffee.

Eventually I led the way back down the way I had come.  Katie and Brian got a little off-route and decided to try another way around.  So I descended the rock chute solo.  It took just as much time, if not more going down.  Also, after I saw the third death rock go flying I realized it was really dumb to have my helmet in my pack and not on my head.  I put it on and kept doing down. 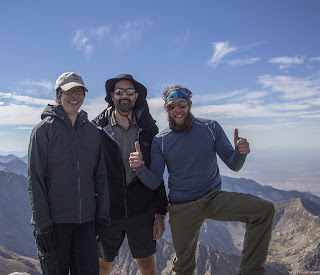 Somewhere in here I ran into Katie’s friend Jason - though I didn’t realize it at the time.  He said he was looking for a lady friend of his.  I told him there were plenty of those up above me, not thinking anything of it.  As it happened he missed Katie and Brian due to their detour, and it wasn’t until we were back at town I figured out who he was. 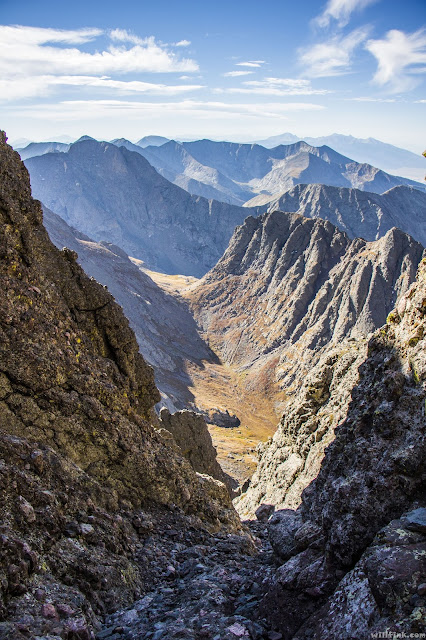 Once I was out of the chute, I lost the route a bit.  I was always growing a little concerned about where Brian and Katie were, and expected them to pop out somewhere near where I was.  After hanging out for a little while, I decided that maybe they had been forced to descend lower down then I was.  When two other climbers came down who hadn’t seen them, I decided to get moving again.  The three of us found the route once more and kept going.

Not five minutes later, I heard my name called behind me.  Turning around, I saw my two wayward companions, and we were reunited again.  Turns out, they had hit a suicidal cliff face and been forced to retrace their steps.

We decided to make another off-route scree scramble down to Cottonwood Lake for lunch - which would also put us on the route to go after Crestone.

As we left the practically manicured section of trail, a passing climber said, “The path down to the lake is just a little ways ahead”.

To which I replied, “Yeah, but Katie likes dangerous downhill scree scrambles.”

Brian added, “We just cry and try to keep up with her.”

Then we continued our mad descent.  Both Brian and I fell on the harmless-looking green leafy plants that were in reality extremely irritating death cacti covered in millions of tiny hair-like thorns.  Well, it wouldn’t be a trip to the high-desert if I didn’t walk away with several thousand impossible-to-remove spikes stuck in my skin.

At the bottom we enjoyed a short but pleasant lunch despite the howling wind.  I was absolutely beat and was weighing whether or not I had another 14’er in me that day.  The darkening sky made our decision for us.  We had no interest in getting caught up there in a rainstorm. 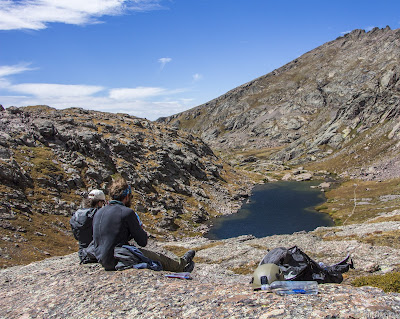 So instead we started the slog back uphill.  We passed a group of longhorn sheep (maybe? goats?) as we headed for the small pass.  I don’t know what had gotten me up the Needle, but it was depleted, and I practically had to crawl my way out of there. 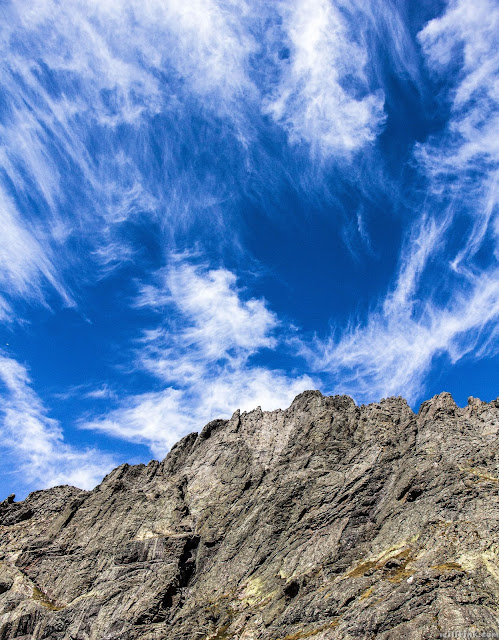 Thankfully the climb was short, leaving us just one more downward scramble, and then a super long and crappy scree field.  My legs were wobbly, and I missed having my trekking poles.  We lost the route again, probably the exact same spot as on the way up - but eventually hit the more obvious path leading back to South Colony Lakes.

More long horned sheep were hanging around camp, but we didn’t stay there long.  The rain was most definitely coming, so we broke camp in a hurry and hit the trail.  It was a fast and easy cruise mostly downhill.  The edge of the storm caught up to us just about 30 minutes before we got back to the trail head.  Luckily, the worst of it seemed stuck on the other side of the ridge. 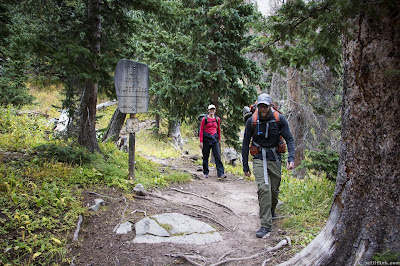 Back at the vehicles, we made haste to get out of there, not relishing the idea of tackling the mess of a “road” with the added bonus of mud.  Brian went ahead of us on his bike, and got behind the wheel of Katie’s forester and took off after him.

The driving proved not to be that bad though, as we still seemed to be missing the main brunt of the storm somehow.  On the way out we even got treated to a sweet double rainbow, with the road running right down the middle of it. 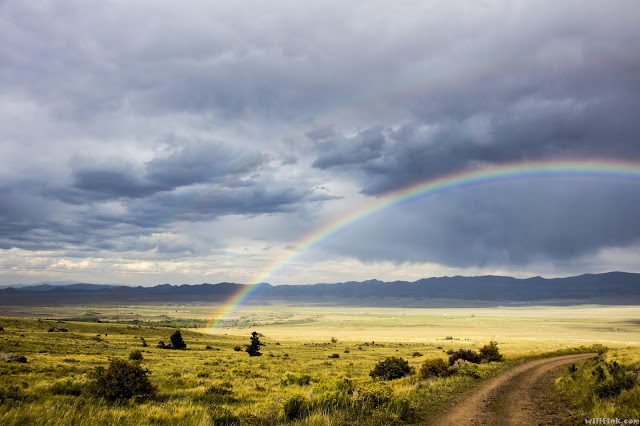 After more burgers at Chappy’s, we said goodbye to Brian and hit the road back to Denver.
Posted by Savage at 11:43 AM

Email ThisBlogThis!Share to TwitterShare to FacebookShare to Pinterest
Labels: Colorado