GQ put this trip together, but sadly had to fly out of town for work. B.A. and I stepped in to take care of his light work. We met Beastmode at the Dorsey Marc station then started the long slog north. After the required traffic snafu’s and a navigational faux pax we rolled into the Cascade Inn after midnight. The Look had already arrived and moved in. Temps were below zero!

We grabbed a few hours sleep, packed our gear, and headed out for the trailhead close to 7am Saturday morning. Are we drove around the Loj overnight parking looking for U-turn’s team’s rental van, they rolled by in front of us! So much for our 6am starts! 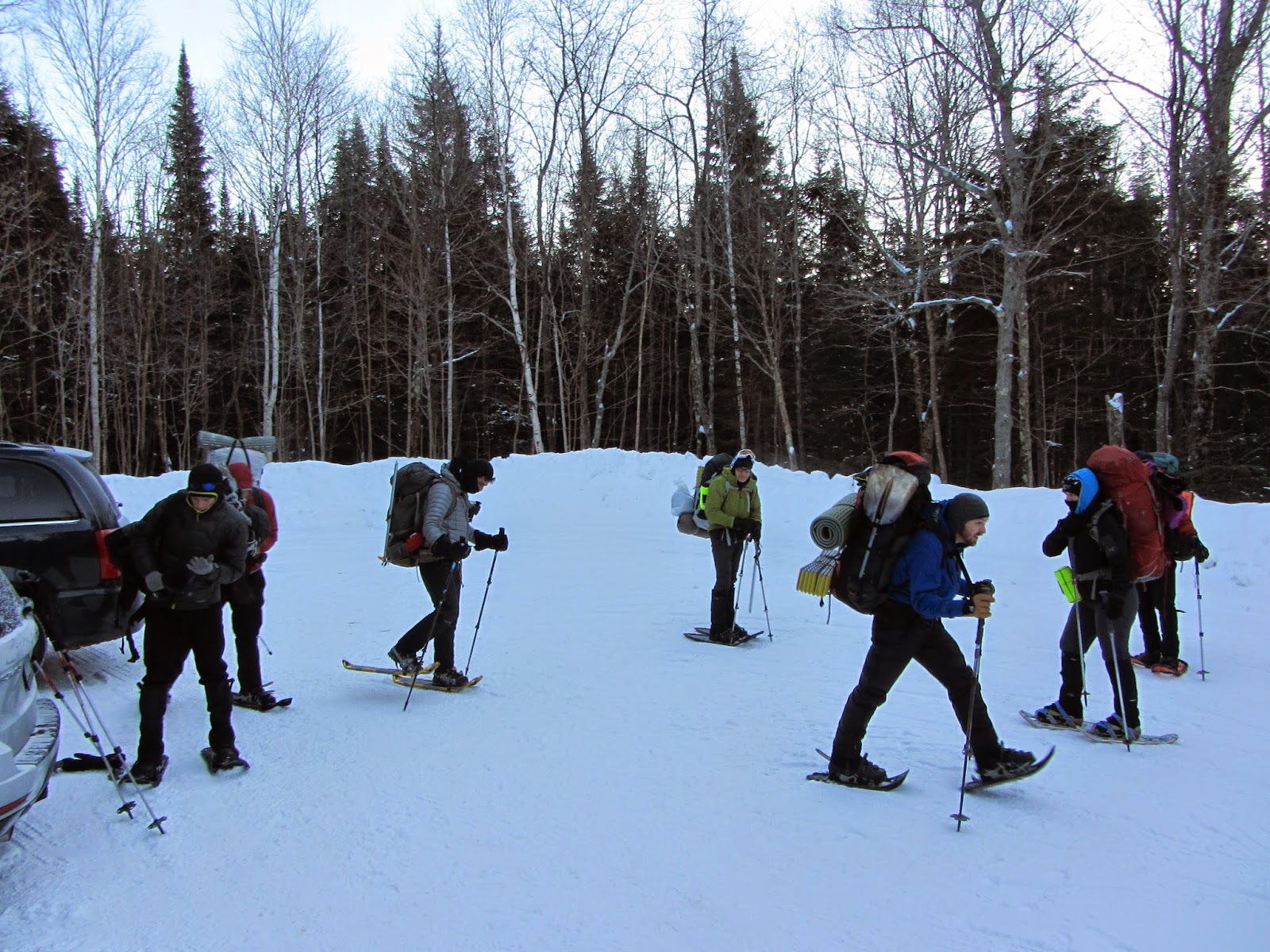 We suited up, strapped on our packs and snowshoes, and headed off into the minus 17 degree morning. Now, who would appear at this moment? None other than Blue Blazes! She snapped some pics of us before heading off to bag some peaks herself.

After signing in at the trailhead, we headed off towards Marcy Dam with U-Turn, Shuttle, Prius, and Superman. Despite the negative temps, the weather was clear with little wind. We cruised along, quite toasty in our layers and shells.

We trekked directly across the frozen lake, and then Team 1 split off and followed the blue trail markers to Feldspar where they would make camp. We took the yellow markers towards Avalanche Pass and Lake Colden. We were soon sweating and had to shed layers as we climbed. The trail was well packed and pretty easy snowshoeing, but we labored with our massive winter loads. After clearing Avalanche pass (which was littered with very cool frozen water flows and rock formations), we charged directly across Avalanche lake. The ice was firm - covered with several inches of snow, with some drifts that were knee deep. We heard a few pops as we cruised through the awesome scenery. In between Avalanche and Colden lakes, we ran into a Forestry Ranger. He gave us some summit intel for Algonquin - wind speeds of 40 mph!

We blazed a trail across lake Colden and claimed the familiar shelter at Beaver Point. Happily, we emptied all our heavy gear into the lean-to and had lunch. Around 12:30pm we headed west to bag Algonquin. It was stiff climbing. Karan struggled with the snowshoes I had loaned him, which really weren’t meant for this terrain. I huffed and struggled with the ascent - with nothing to blame it on but Christmas cookies. After snagging my ice axe in branches for the 20th time, I took it off my pack and stowed my poles. I also switched to Hillsounds as I was tired of tangling my snowshoes in the scrambly path. Eventually I caught up to John, Joffrey and Karan just below treeline. Time to layer up!

The climb to the peak was exhilarating. Our crampons dug into the iced over slab well, and we made quick time to the summit. The wind was indeed blasting - 30 mph certainly with gusts up to maybe 50 mph. We had a short shouted celebration at the top, got some photos and videos - then headed back down into the face of the wind. 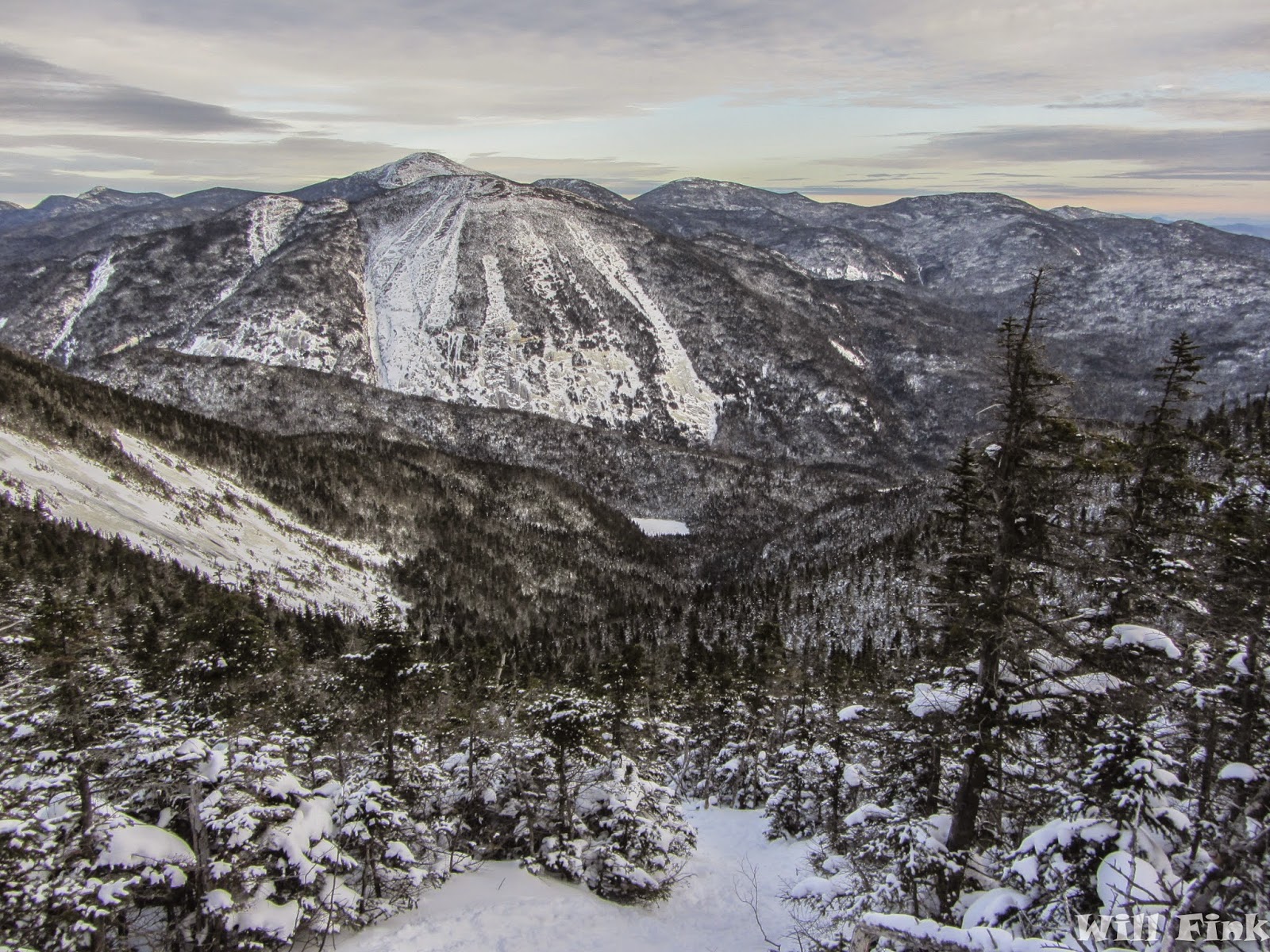 With daylight running out, we decided against going after Iroquois which would have guaranteed finishing hours after dark. At a stream crossing, we chopping through the ice to access some unfrozen water and tanked up. We made it back to our lean-to just has full darkness set in. The next few hours was spent boiling water and making dinner - then we turned in to get a solid 12 hours of sleep!

The next morning we took our time having breakfast and getting ready for the day. We hit the trail around 9 am. We crossed Colden Dam, then starting the climb up to Lake Tear. It took around 3 hours, and we were all soaked with sweat and had to strip down. It was already above 20 degrees! T-shirt weather! We had second breakfast at Four Corners, ditched our snowshoes, and started the ascent to Marcy in our crampons. 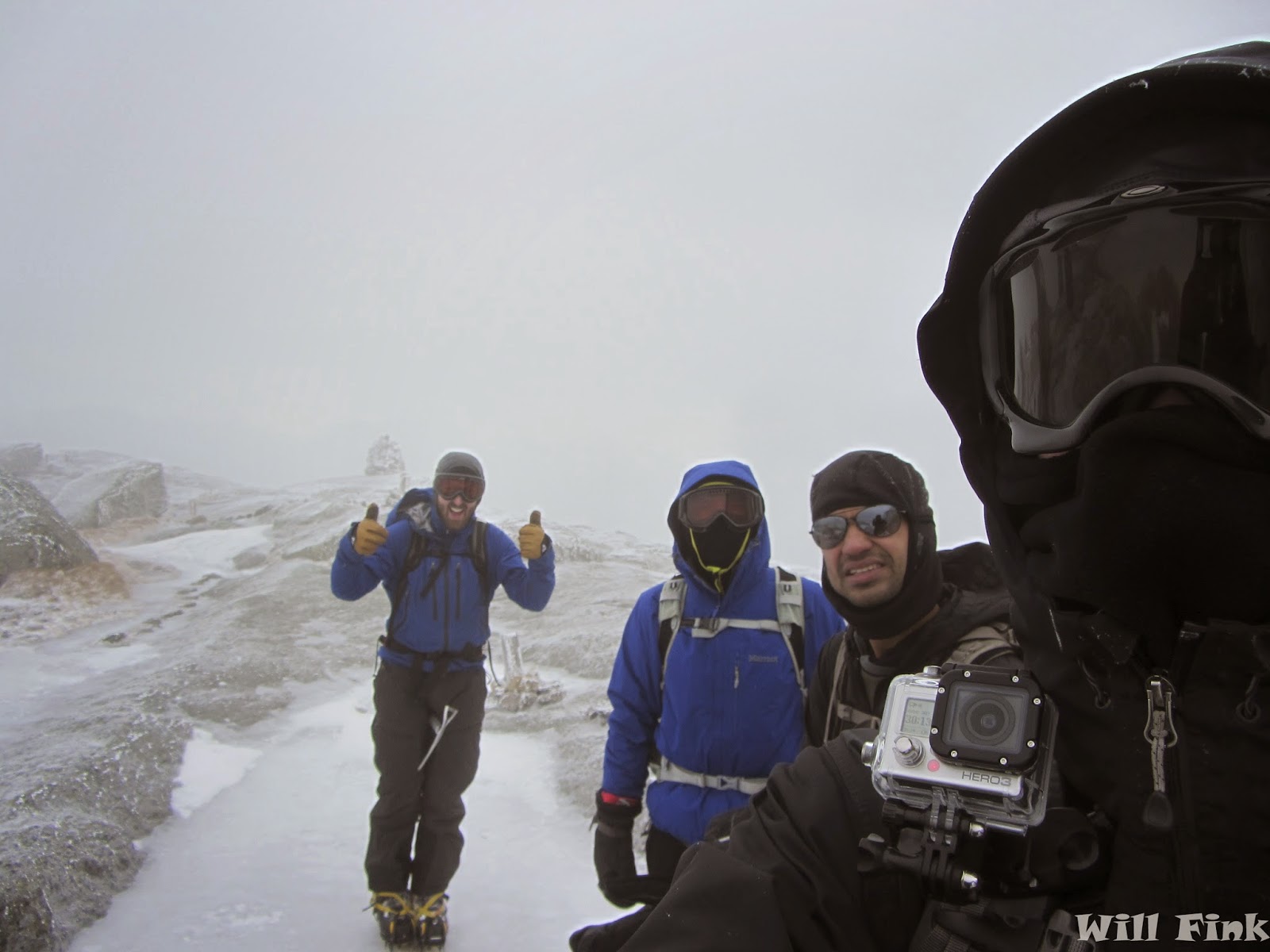 Karan and John set a blistering pace up the ice covered rock - despite the gusting winds I was sweating through my base layers. The summit was reached in no time at all - where the wind was just short of blowing us off the table-top peak. The clouds swirled around us, and we occasionally had clear windows at the surrounding peaks and valleys. We took shelter for a few minutes in the lee of the summit. With another incredible climb of Marcy done, we snapped photos, about-faced and cruised back down. 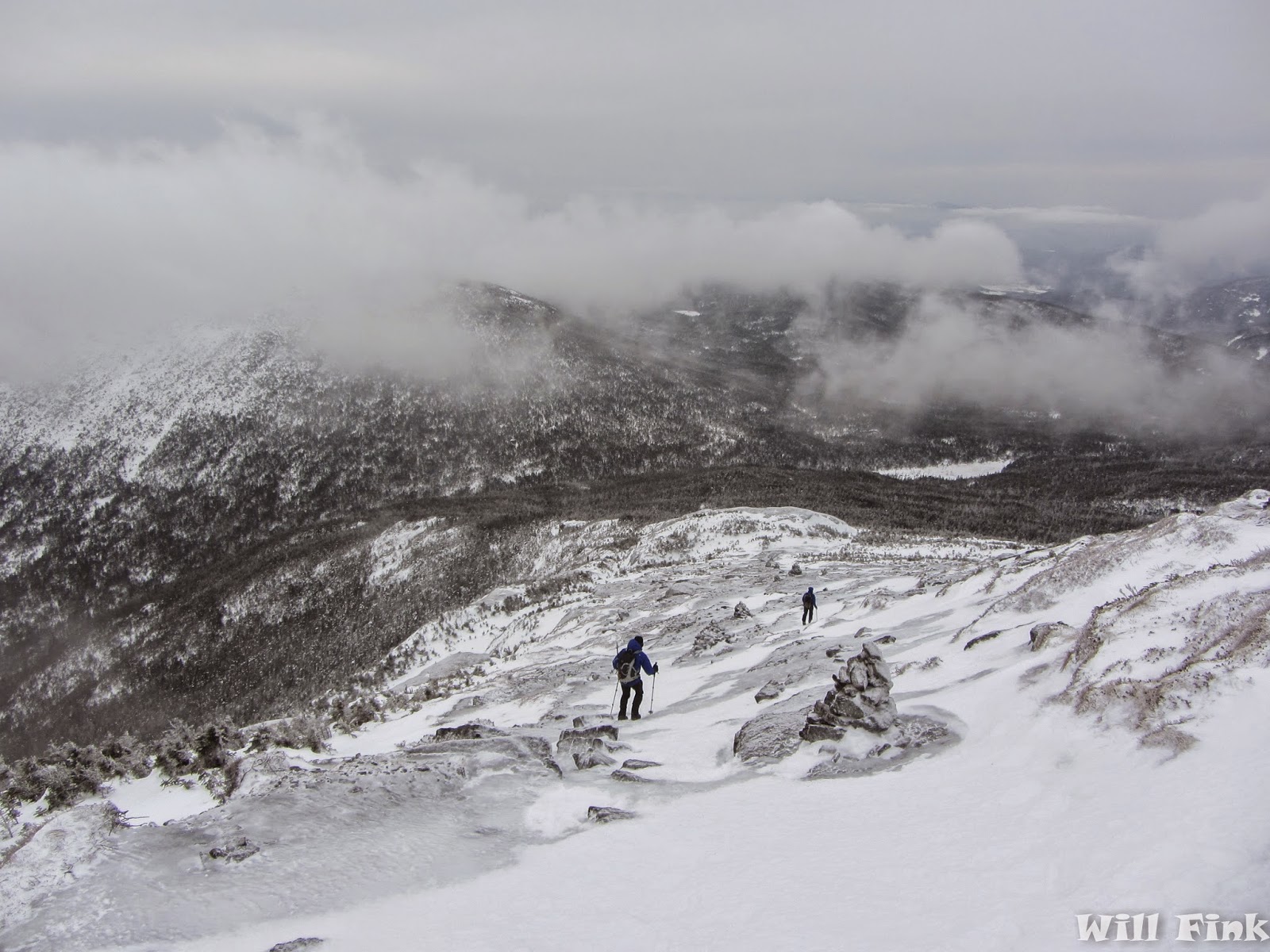 After returning to Four Corners, we knocked out Skylight to the south in short order. The summit was totally socked in. With no views to enjoy, Beastmode and The Look banged out some summit push-ups, then we descended. We cruised back down towards the lakes, and ran into some familiar fellows at the turn to Feldspar! Matt and Kevin reported Jen’s injury, and that she and Michael were off the trail. We imagined they were enjoying a hot tub and football in Lake Placid.

Prius and Superman had gone into full epic mode, banging out a score of peaks that day! After chatting for a few, we finished our walk back to Lake Colden as darkness fell once again. This night was almost balmy, and we all roasted in our heavy winter bags as temps stayed in the 20’s. At one point in the night we were disturbed by snow blowing into our shelter - and did some quick scrambling to keep our gear dry. 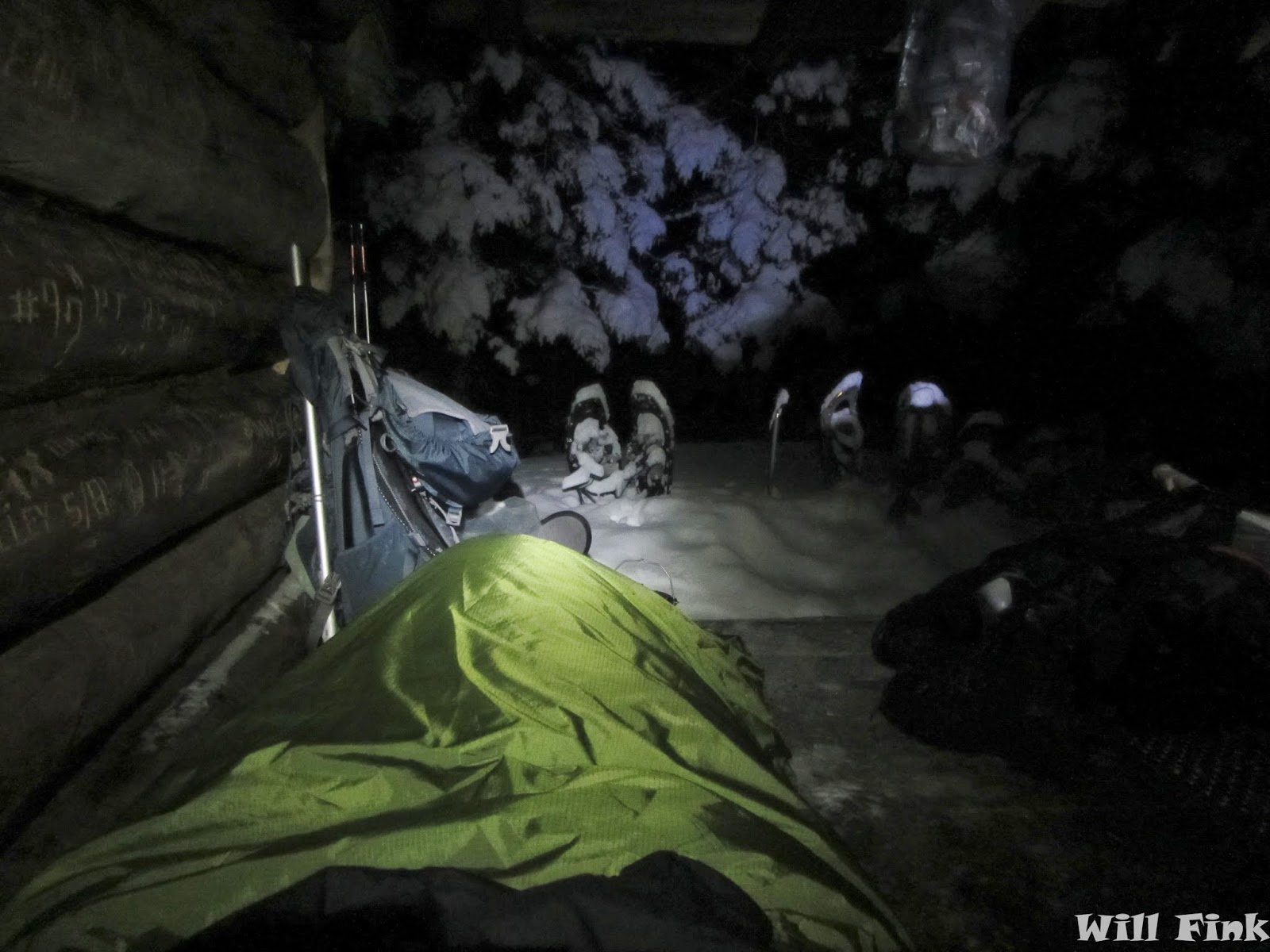 In the morning, we retraced our steps back across the lakes - blazing a new path as fresh snow was coming down. The warm weather forced us to strip down to base layers as we crushed the 6 miles back to the Loj where Michael and Jen awaited us with coffee and donuts! After the requisite stop at Noon Mark for breakfast/lunch - we started the long return drive home. 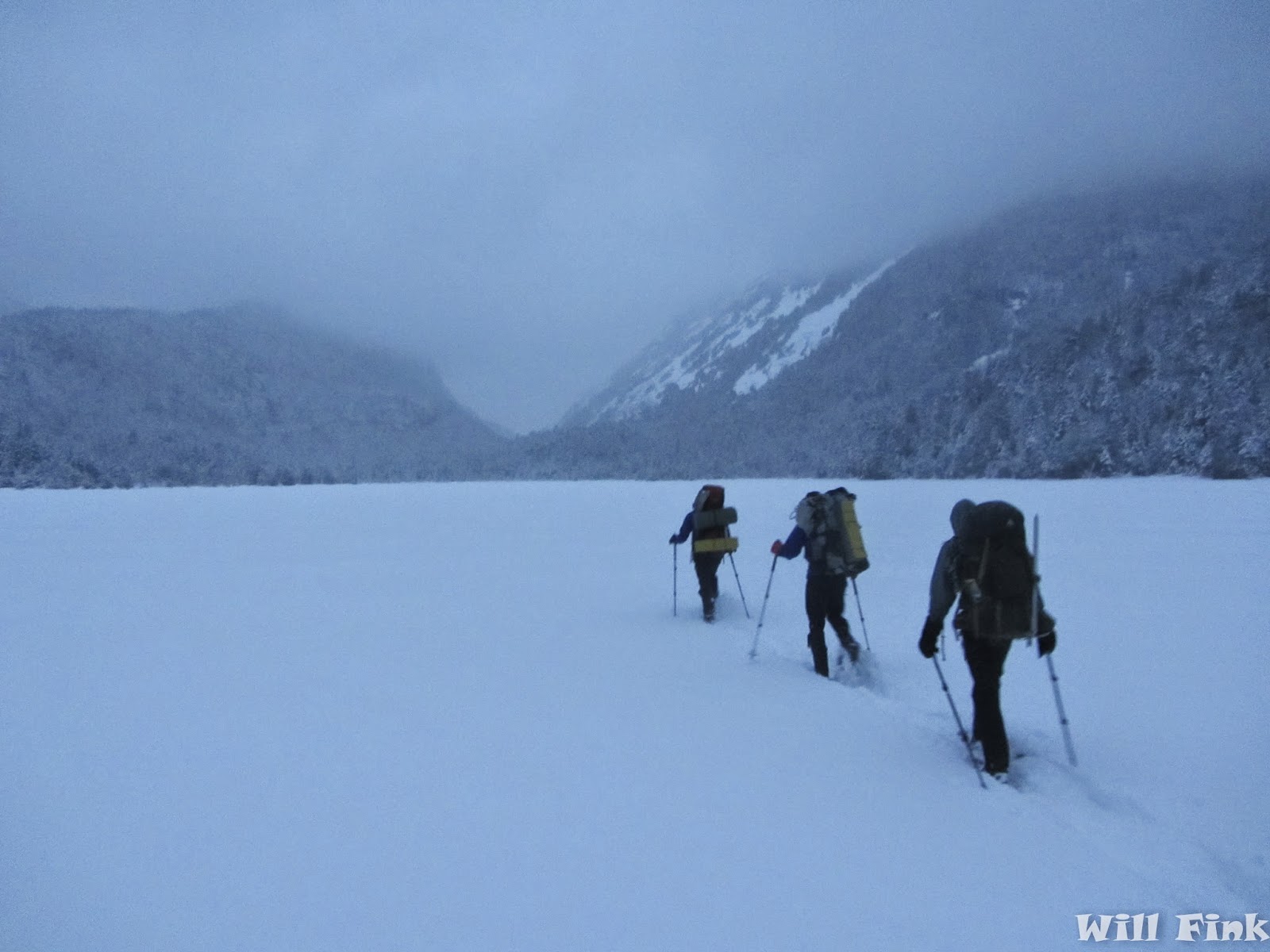 Thanks to both teams for a great weekend! The ADK’s never get old. It's always tough climbing, but we had a strong group with no fear of arctic conditions. Kudos to all!
Posted by Savage at 6:39 AM No comments: