Last weekend for 4th of July I tackled another DCUL Backpacking trip to New York's Adirondacks.  This would be my second time in the High Peaks region.  This time we would tackle the Great Traverse.  In typical DCUL style, we had to make it more difficult of course.  Jimmy's (GQ) and Karan's (BA) plan included 17 peaks!  Cake right? 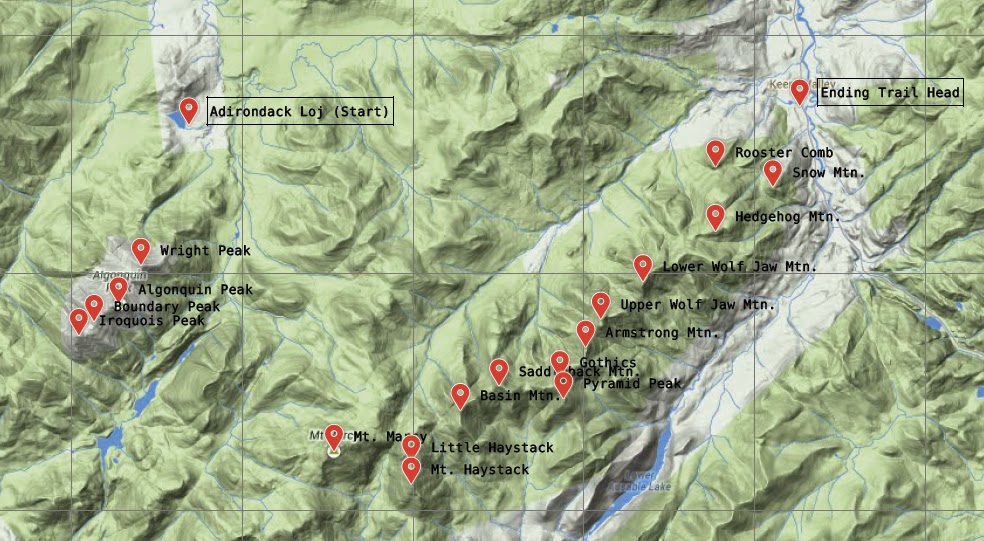 I met Jimmy, Karan, Kylie, Jess, and Upsana at the Greenbelt metro and we started our long haul north. We scooped up Hau from Delaware House - and would meet John who had driven up a day earlier from PA at the ending trail head.  Kylie is from NY, and her parents had graciously offered to let us crash at their house.  We rolled in slightly before midnight, and got in a quick nap.  I slept maybe an hour before getting up at 4:30.  We still had an hour to go, and worried about getting parking at the Adirondack Loj.  We also wanted breakfast!

Groggily we rolled out, hitting the Noon Mark Diner where we met John and slammed down a fast meal.  We made the quick 30 minute drive to the Loj trailhead parking lot, happily finding plenty of room.  We wasted no time in hitting the trail head, climbing gently towards the first intersection where we hung a right and started the real climbing.  We made it to the turn for Wright in short order. Here, in typical ADK fashion, the trail becomes more boulder than path - and turns steeply upward.  All the recent rain insured the rocks would be slippery, and the spaces in between muddy.  My Asics Gel Scouts held on well, despite being just trail runners. 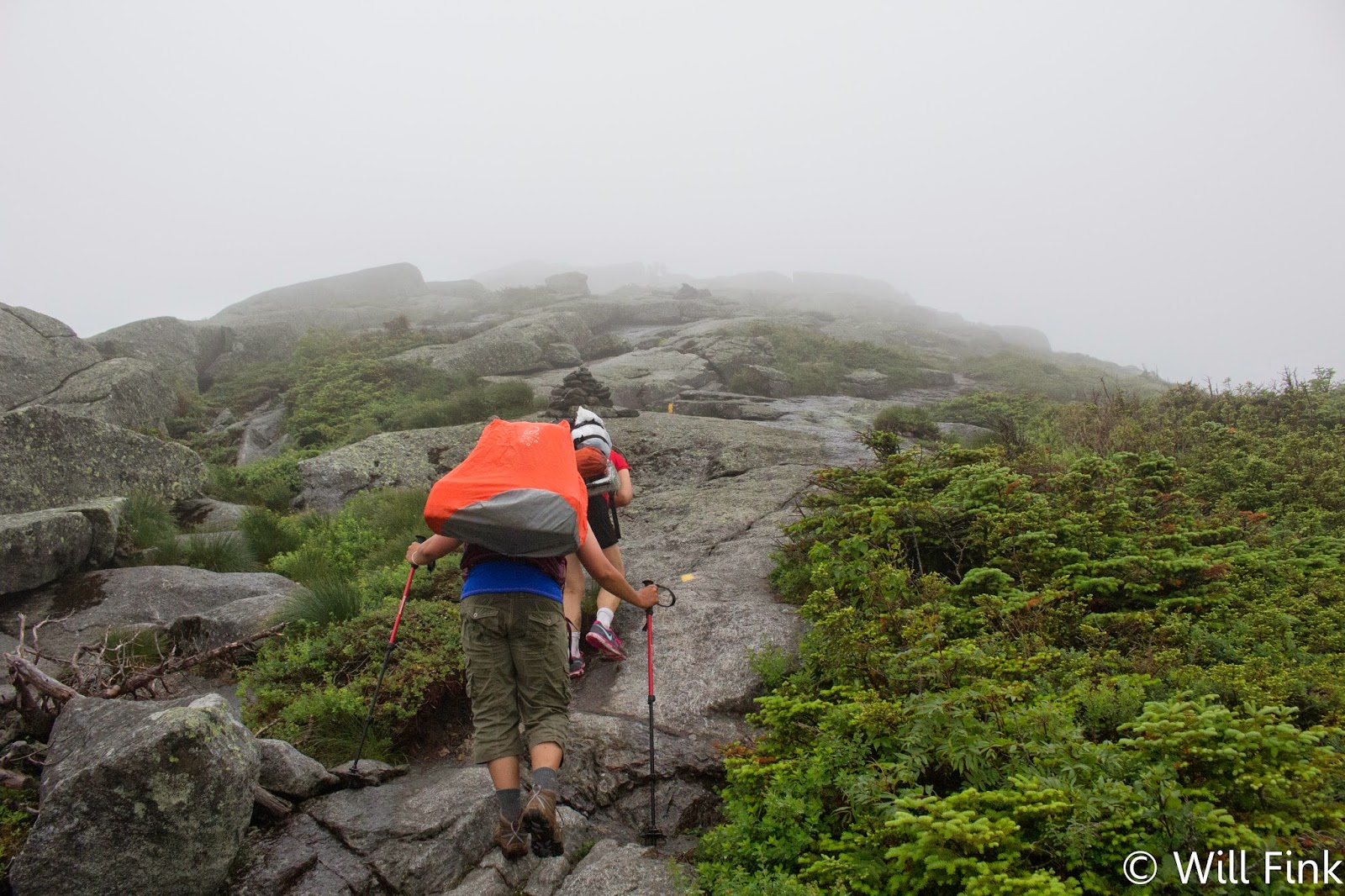 Soon we were in alpine territory, above the treeline, and completely clouded in.  I wasn't feeling very strong, running on no sleep and no exercise since the Foot Hills Trail almost a month ago!  We all ground our way to the top.  We snapped some picks, but with not much to see and high winds we soon reversed course and provided with the rest of the peak bagging for the day.  Algonquin, Boundary, and Iroquois all went down in order.  The cloud cover persisted, and the climbs remained consistently tough - full of scrambles and tricky climbs.  The summits were still glorious, despite the white out. 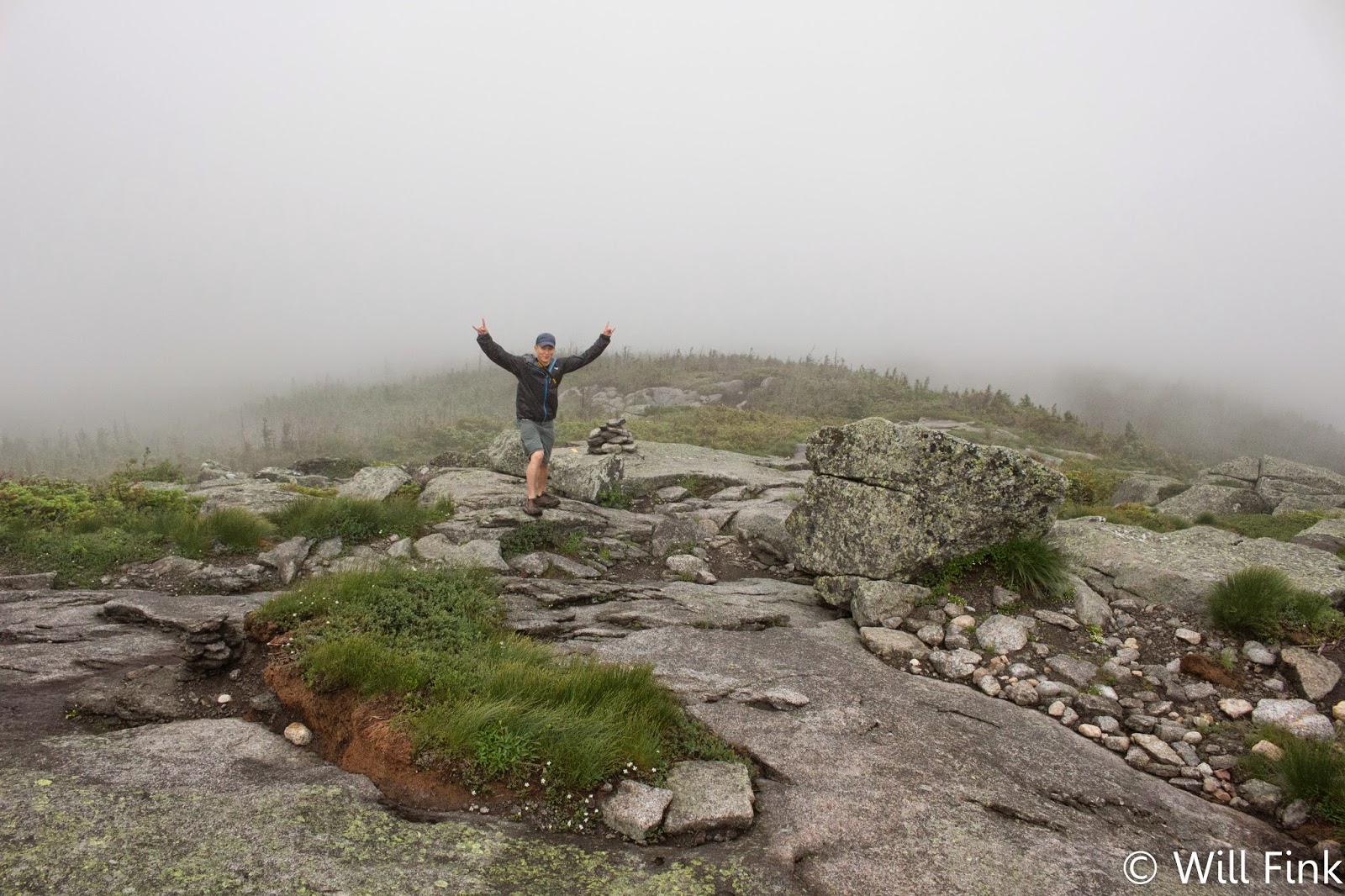 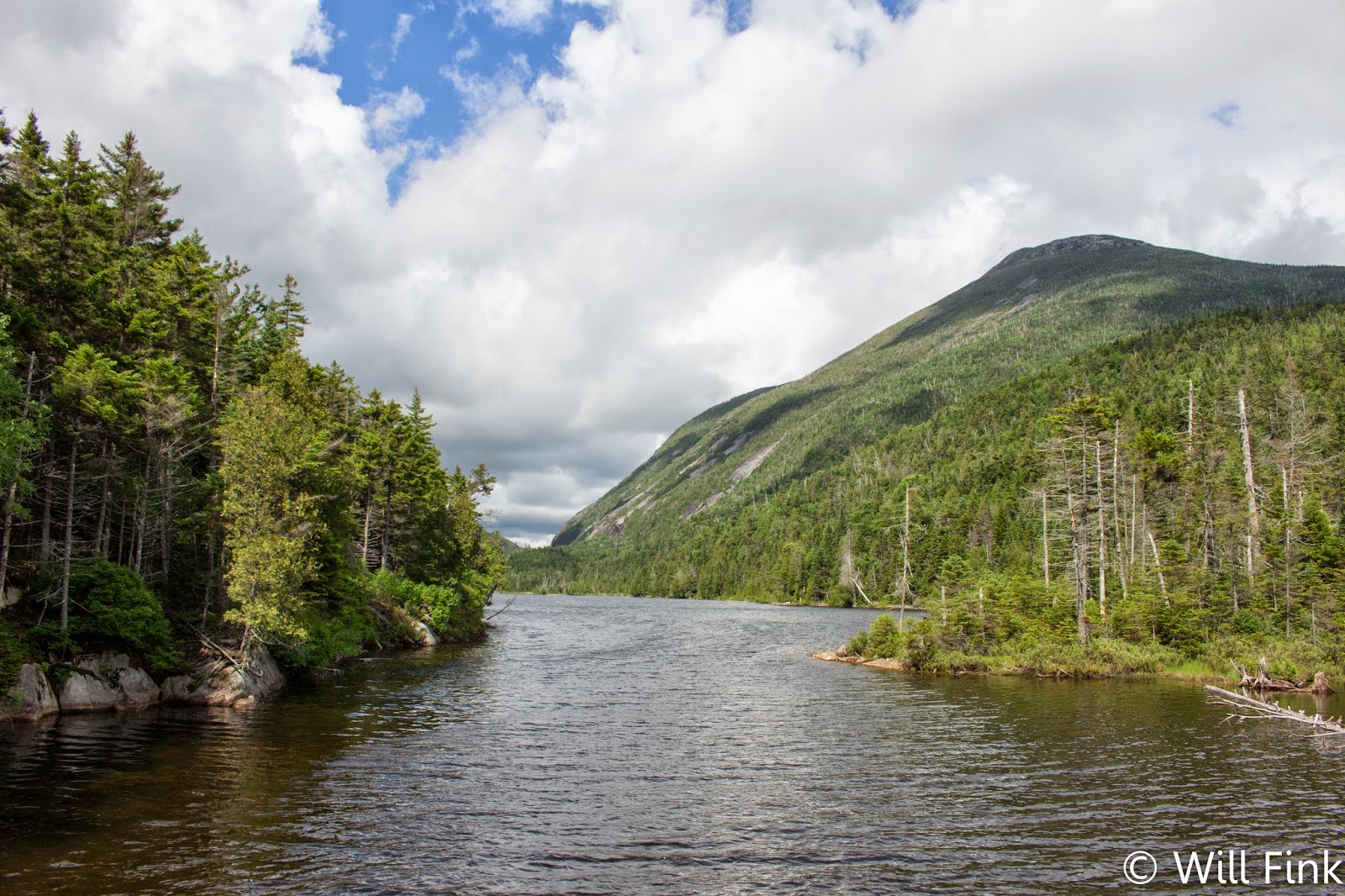 With the range defeated, we descended southeast towards Lake Colden.  At this point, instead of heading straight to the shelters at Uphill or Feldspar, we decided the trip wasn't difficult enough - and started climbing northeast to bag Mount Colden.  What a bear this one was!  My tank was empty, and I trudged up the treacherous climb at a snails pace.  Everyone struggled here, except for Karan who is simply a beast, and Kylie who matched him step for step!  Exhausted, we all eventually made it to the top.  We were rewarded with our first clear summit as the clouds lifted. 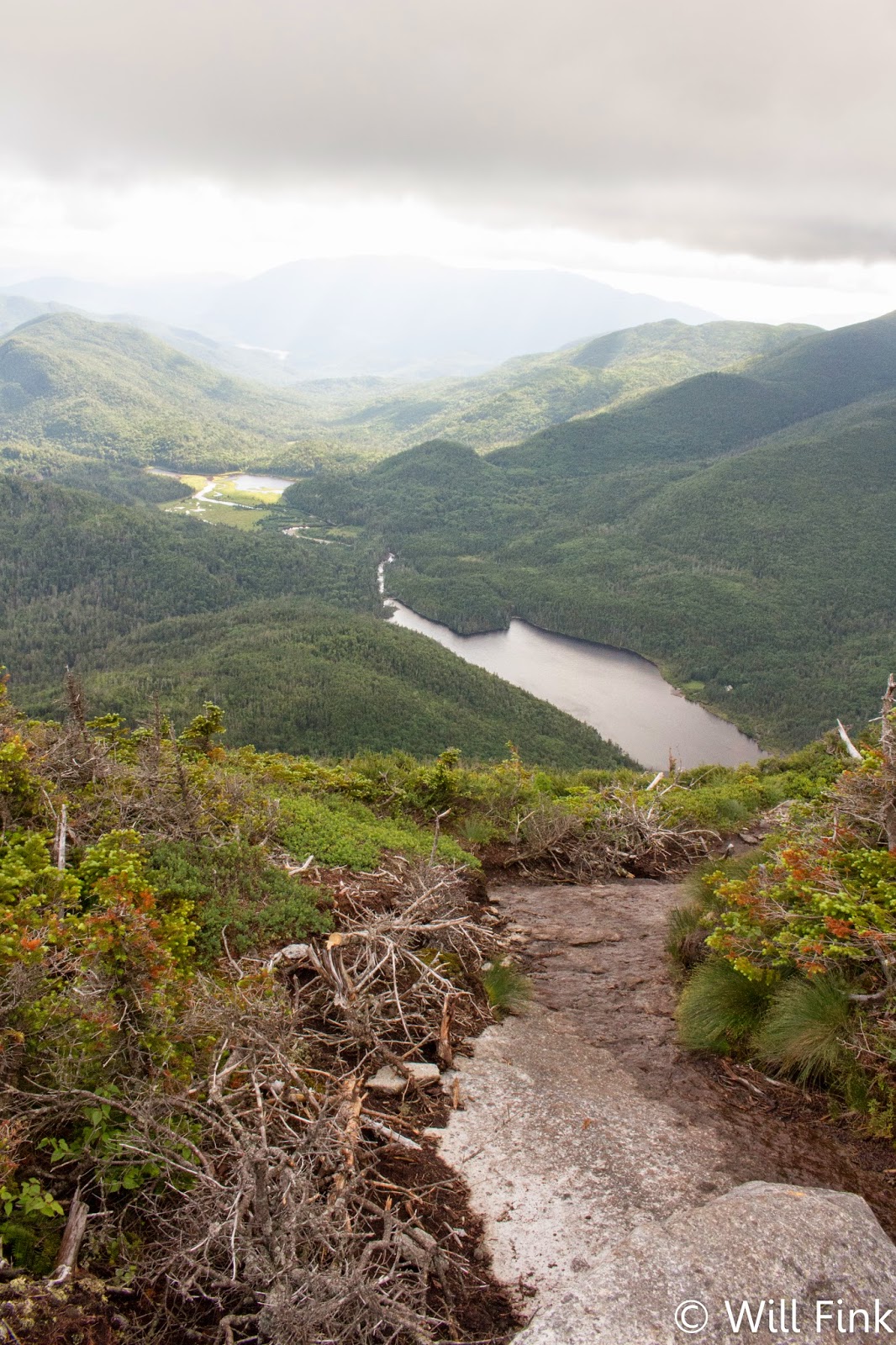 With our peaks bagged for the day, we made the descent down to Feldspar and wedged ourselves into the available camp space - which wasn't much!  We made it just before dark, and had a quick dinner in the fading light before passing out for the night.

We were up and back on the trail around 7, with many more peaks in our sights.  We passed some more familiar paths, albeit free from snow!    The weather was perfect and clear.  We snapped some pics at the headwaters to the Hudson before climbing Marcy. 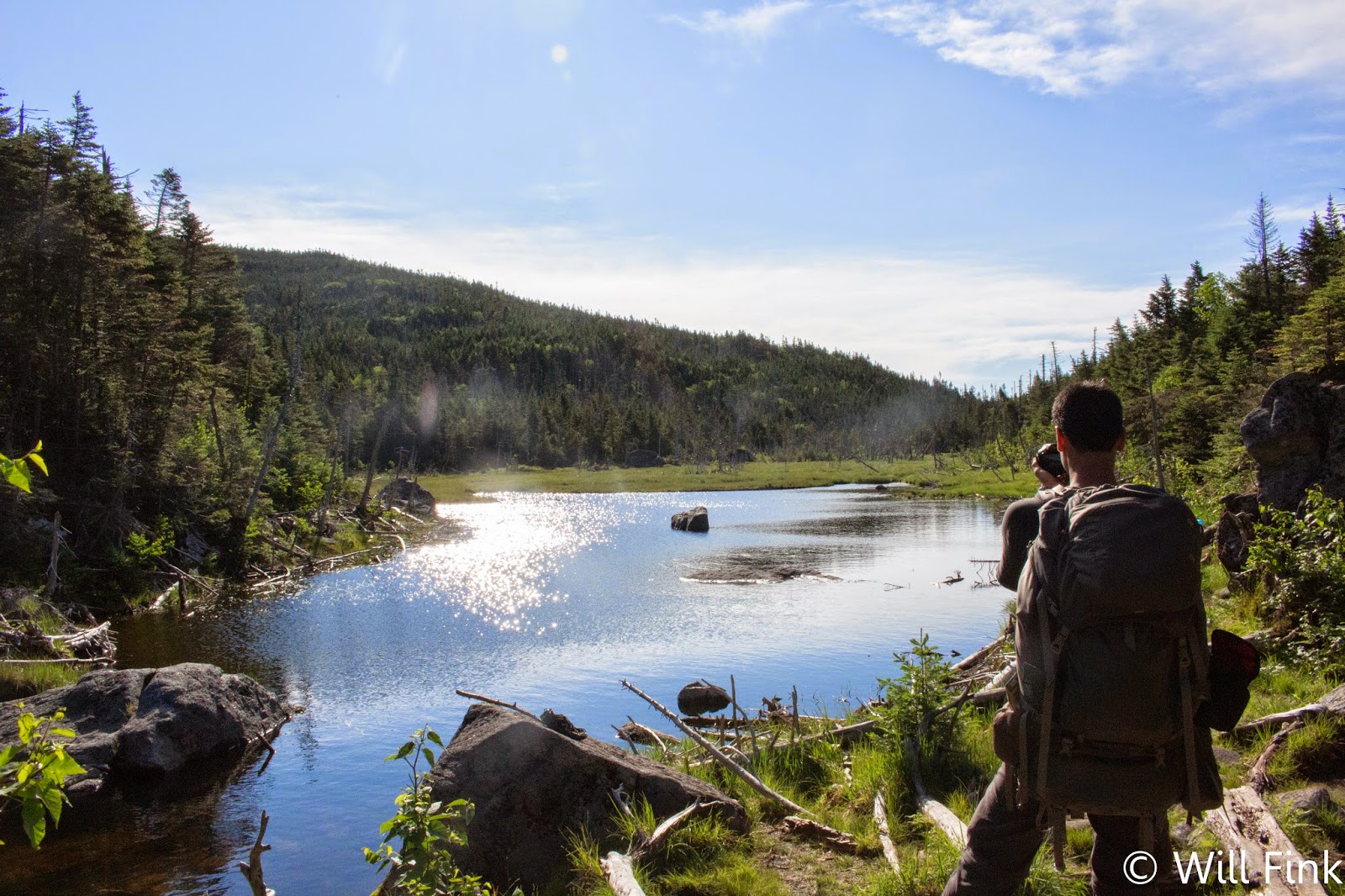 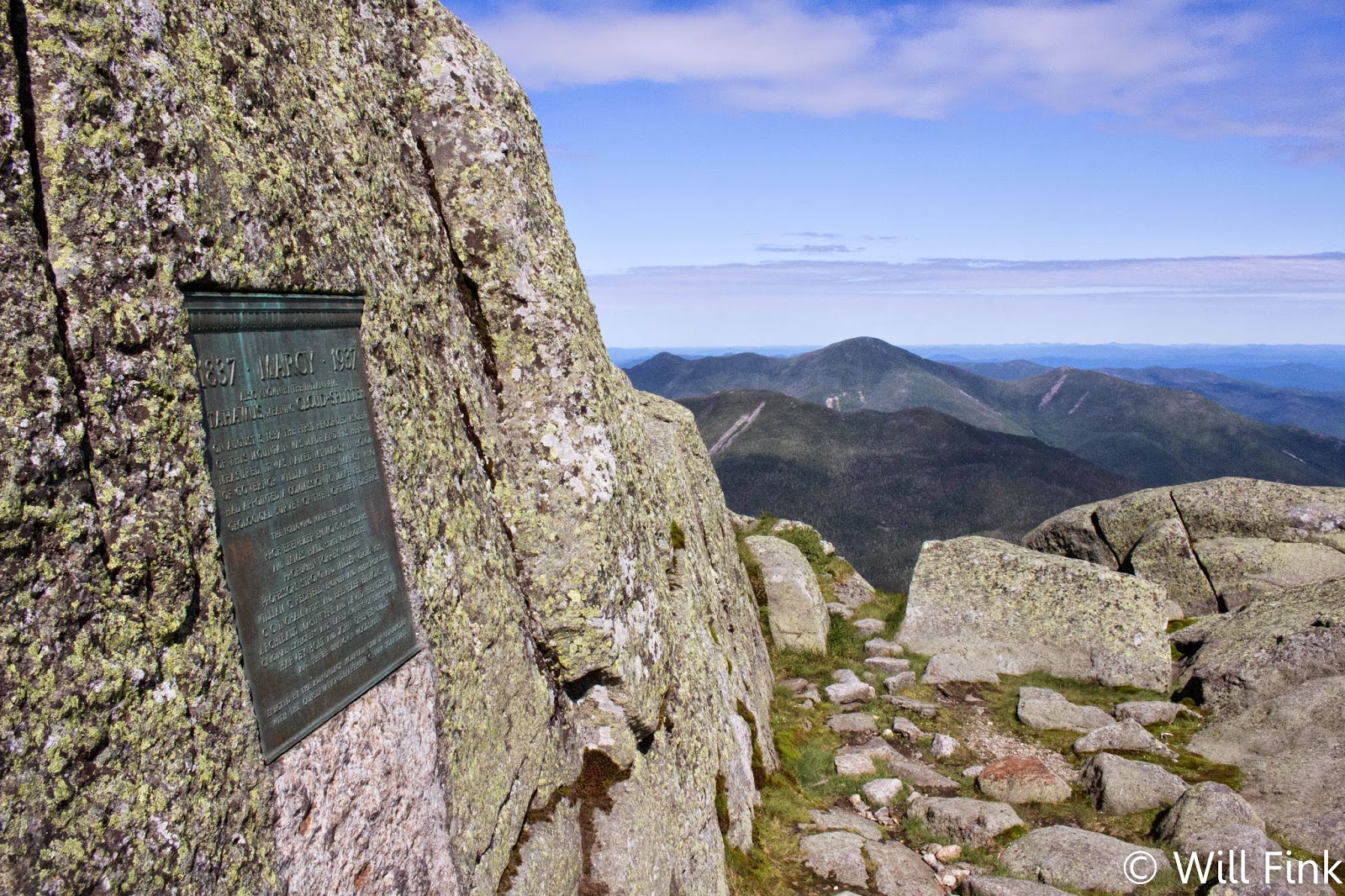 This would be my second summit of Marcy, and it was a nice change to have clear skies!  The climb was no less difficult, but it was a pleasure to be able to hang out and enjoy the views without fear of freezing to death quickly.  We ran into another ADK steward here, and numerous day hikers.  For some reason, few people besides us seemed to be backpacking over every summit!  Spirits were high, and we hoped for an earlier finish today.  Pyramid peak was nixed from the plan, and we headed for the haystacks. 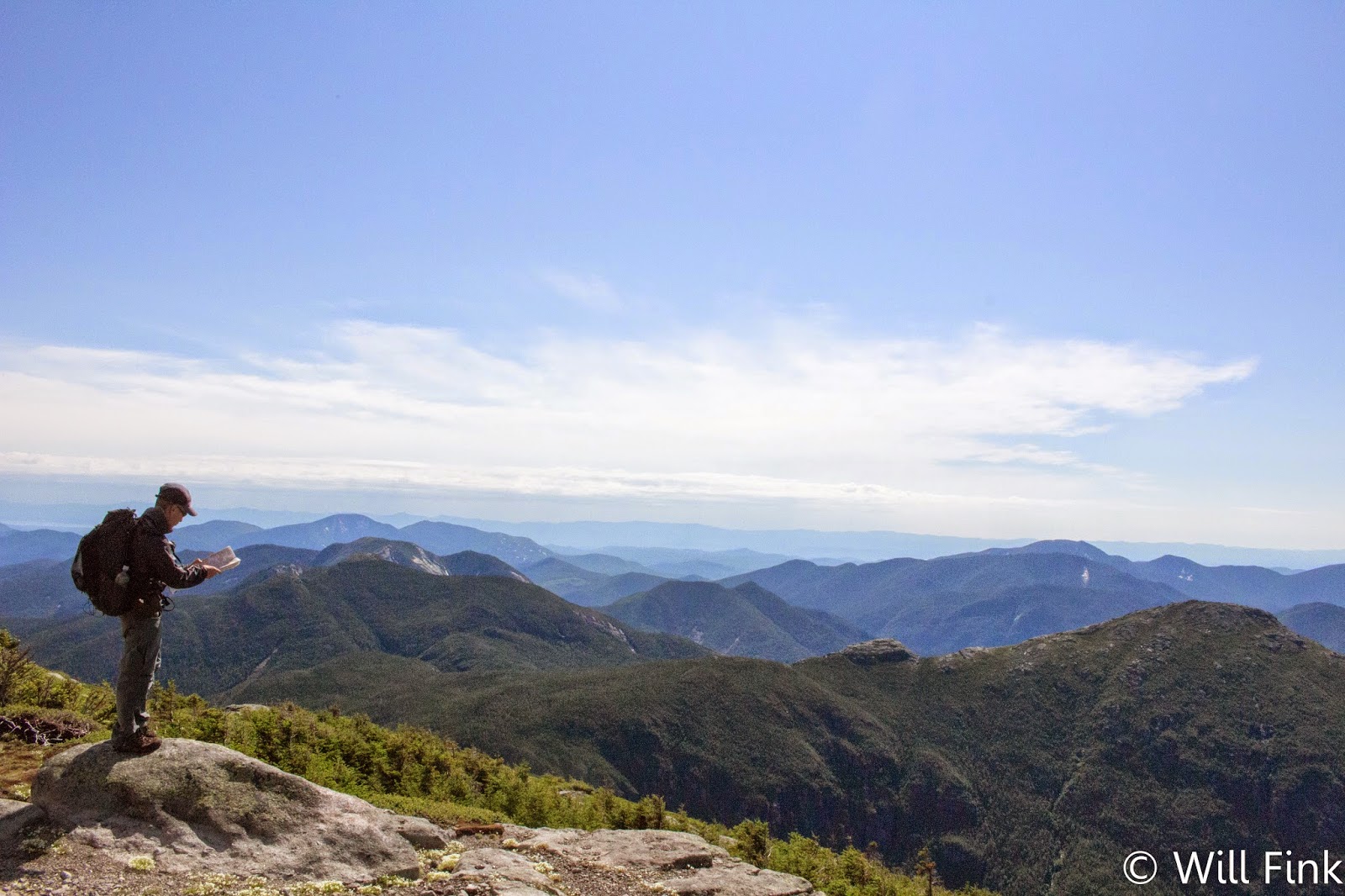 The challenging rock scrambles continued - we could rarely take more than a few steps it seemed without having to make monster steps or pulling ourselves up with whatever hand holds we could find.  Progress was slow!  Nevertheless, we crushed Little Haystack and Mount Haystack in short order. 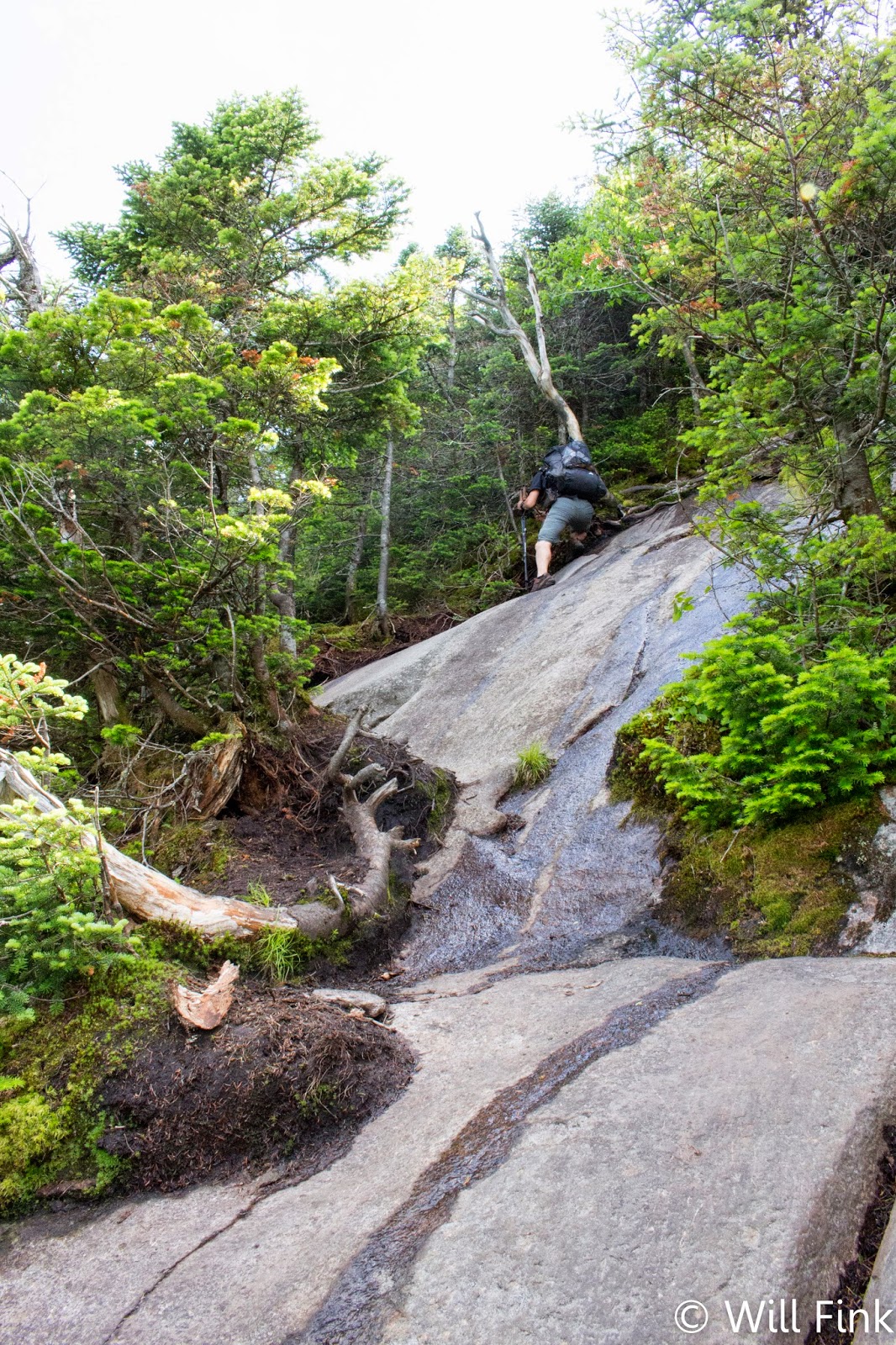 From there, we retraced our steps to continue our summit chase.  Another steep descent, followed by yet another scrambling climb brought us to Basin Mountain.  No part of this trail was easy, and the challenges continued.  Often when descending, it was necessary to turn yourself uphill and down climb hand over hand.  Patches of slick rock added to the danger!

Everyone made it more or less in one piece, though there were occasional slips and slides.  The scrapes and scratches were rapidly accumulating.

We had gorgeous views of the ranges already climbed - I kept thinking to myself it seemed impossible that we had been up and down so many mountains! 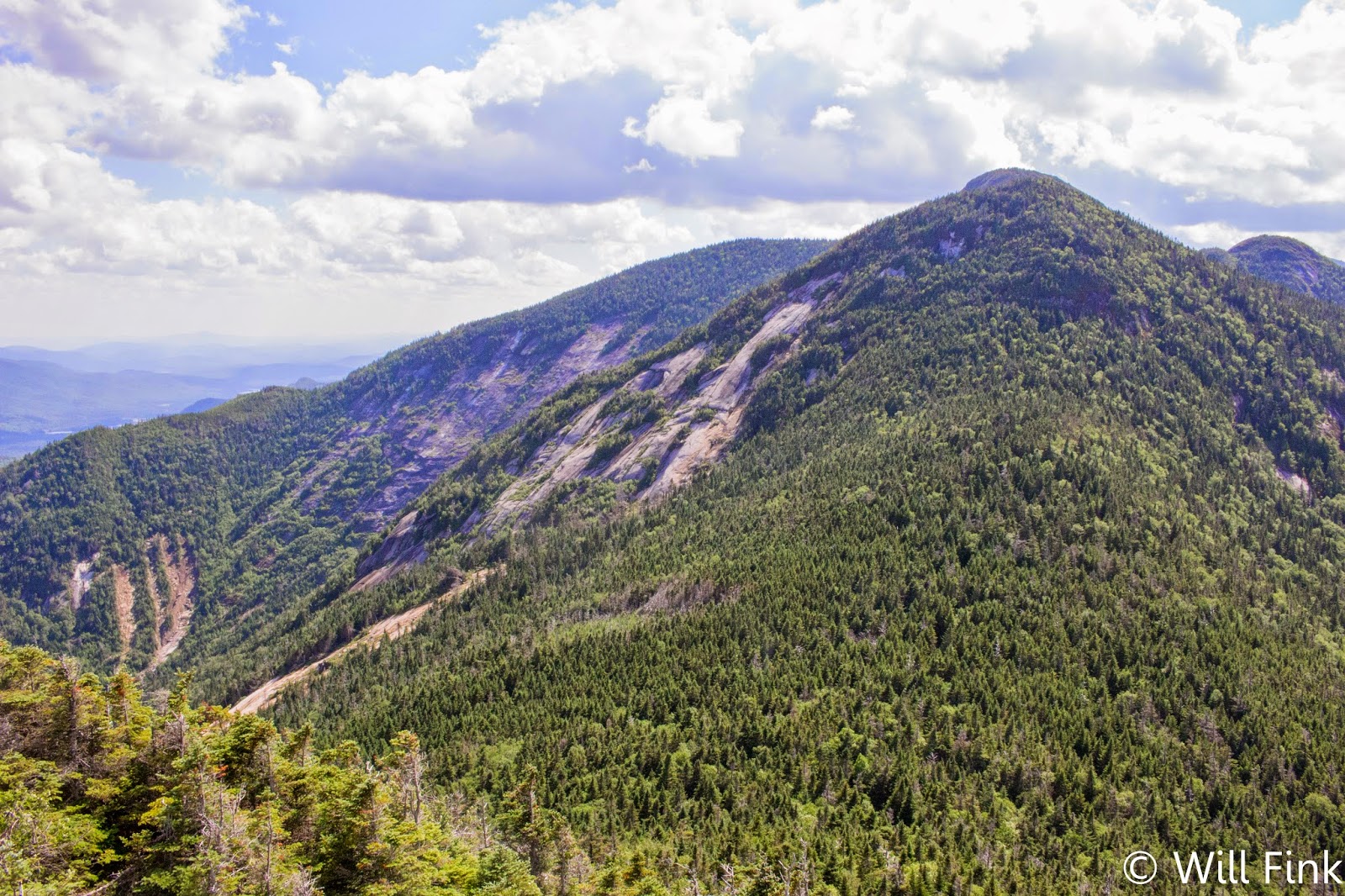 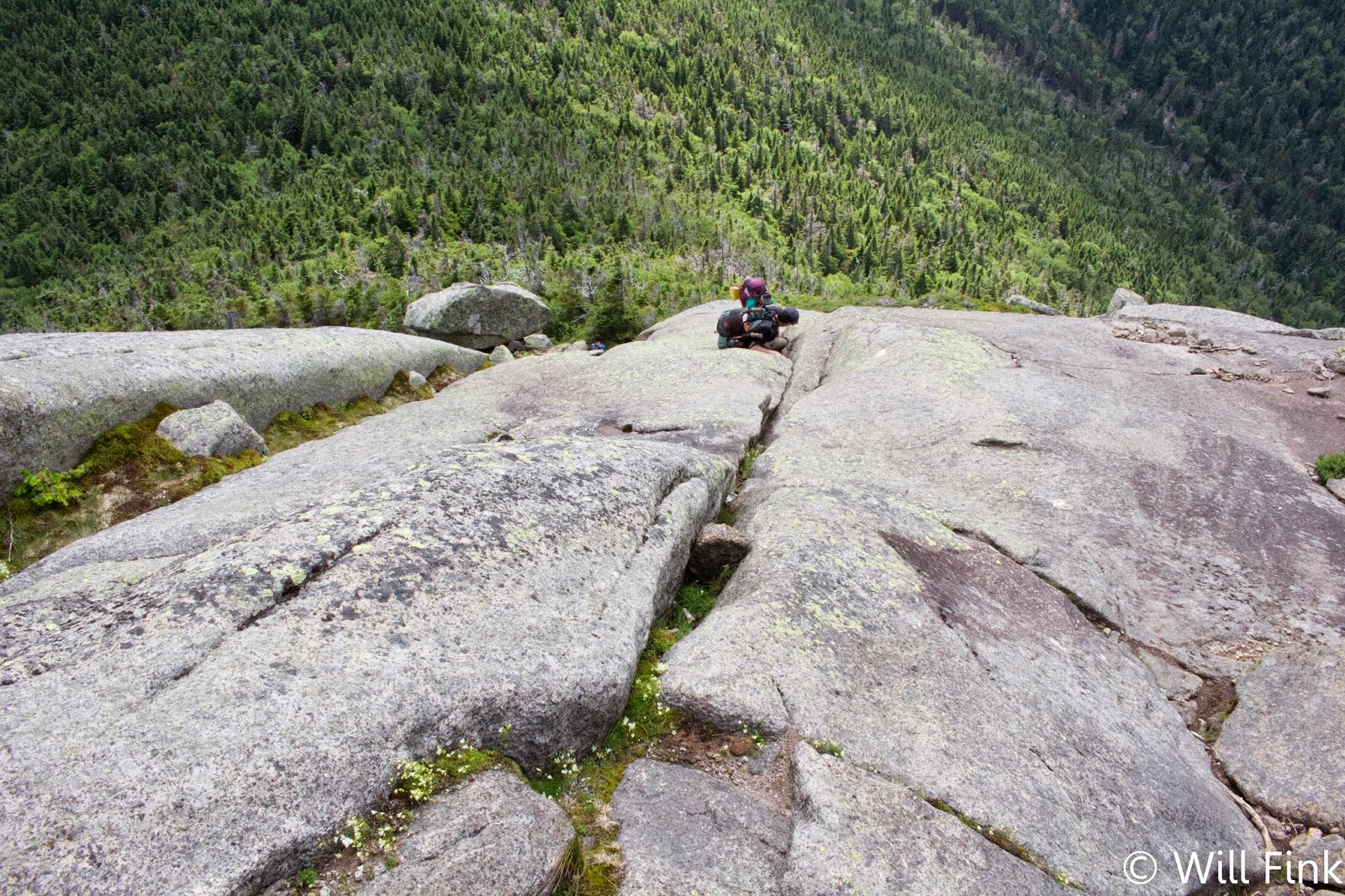 One of the more interesting challenges was yet ahead - the climb up to Saddleback.  Rock climbing experience absolutely helped here - it would be a test of nerves.  Still hauling our packs, with 50 mph windows rocking us, pulled ourselves up the rock face.  This was the first time I was worried about the group making it up We decided to wait and regroup to make sure everyone summitted in one piece.

It took some time, but we all made it without being swept off the face by the wind. 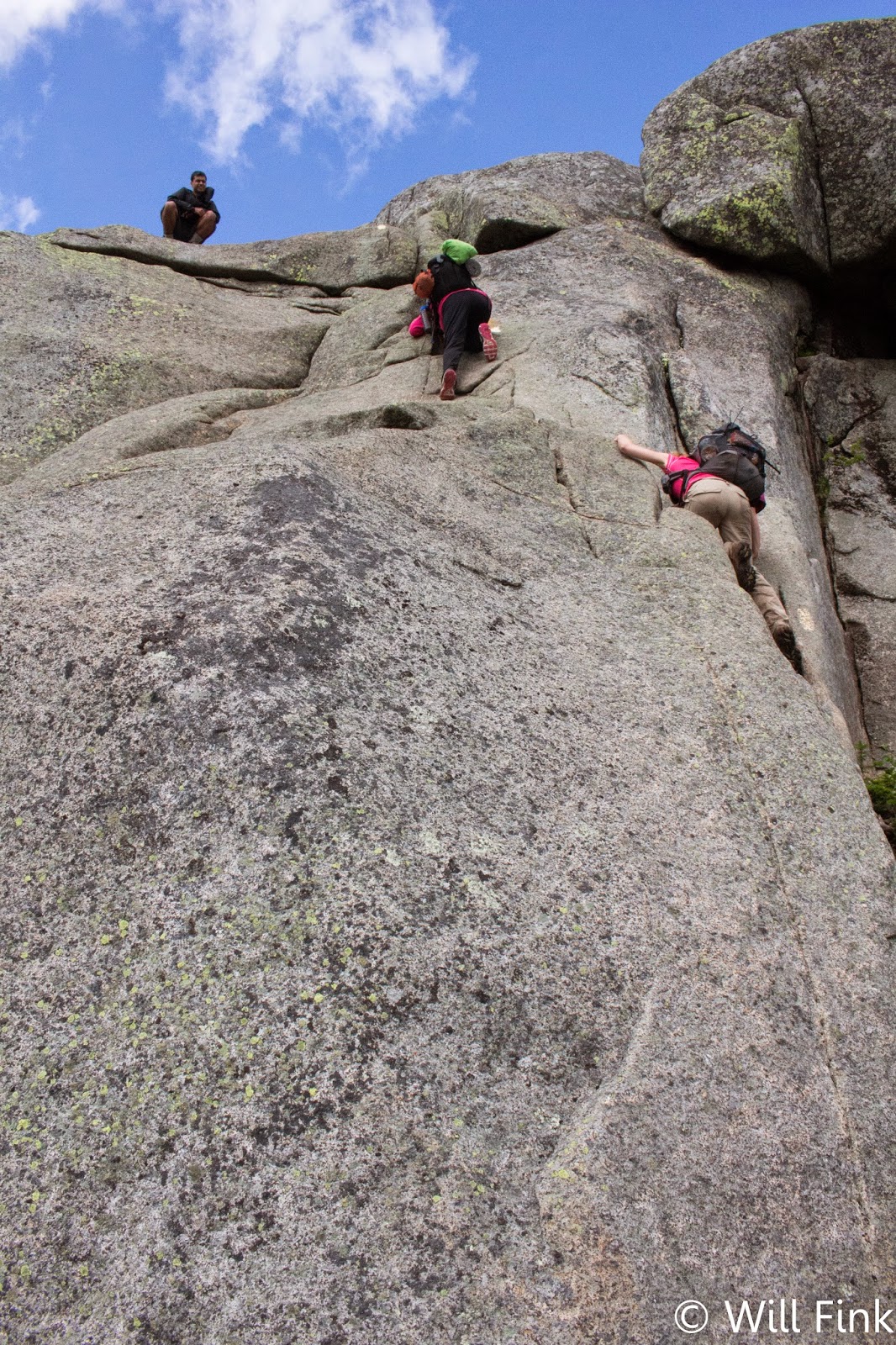 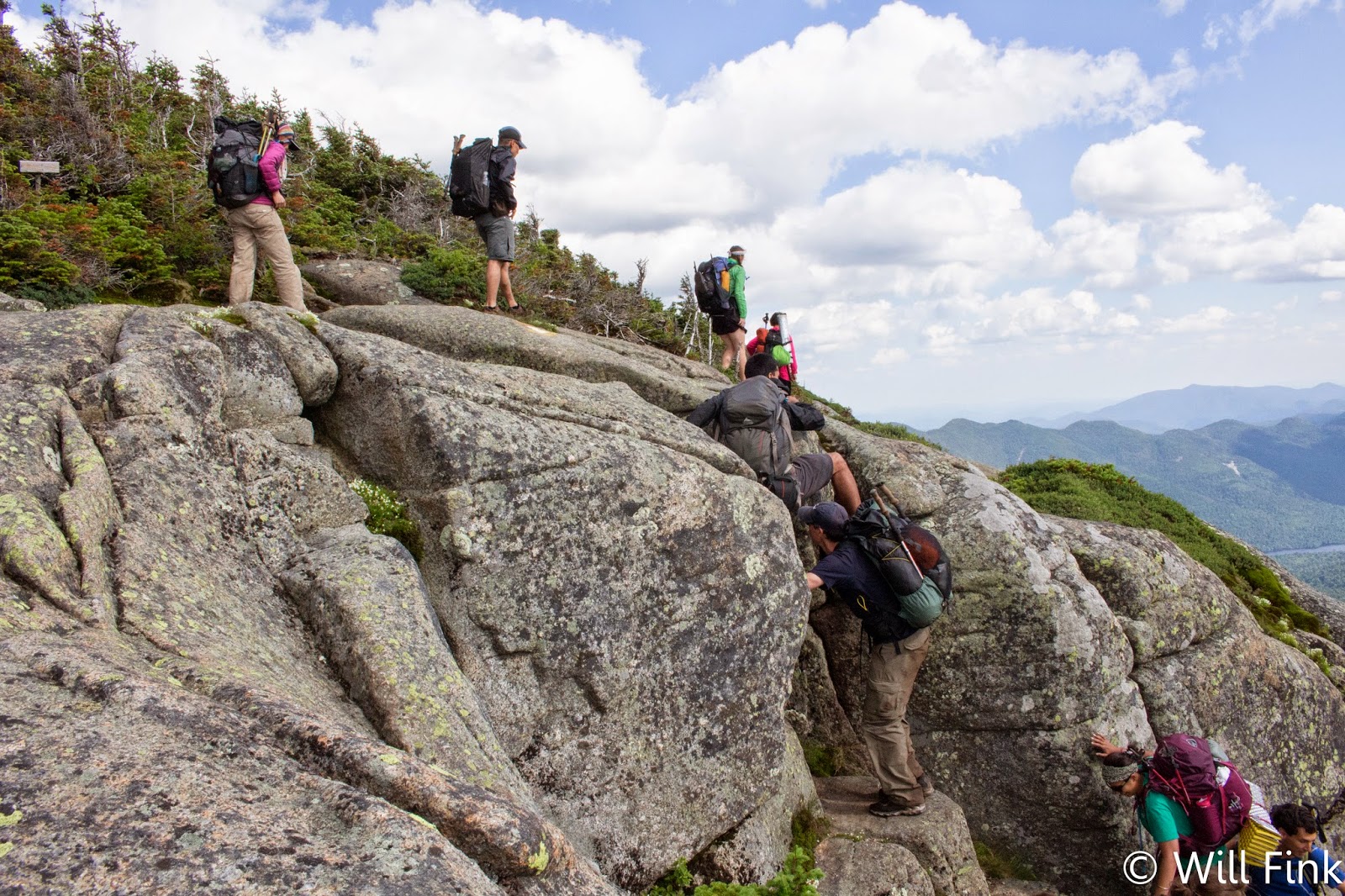 We regrouped atop Saddleback, then continued along the ridge.  I took a hard tumble on some slick rock going down the backside, but no harm no foul.  The descent wasn't any harder then the previous ones had been.  Up next: Gothics!  The climb up to the alpine section wasn't terrible.  Inexplicably, there were cables here (but not on Saddleback?!).  They weren't really required as the rock was dry, but I made use anyway and gave my legs a break. 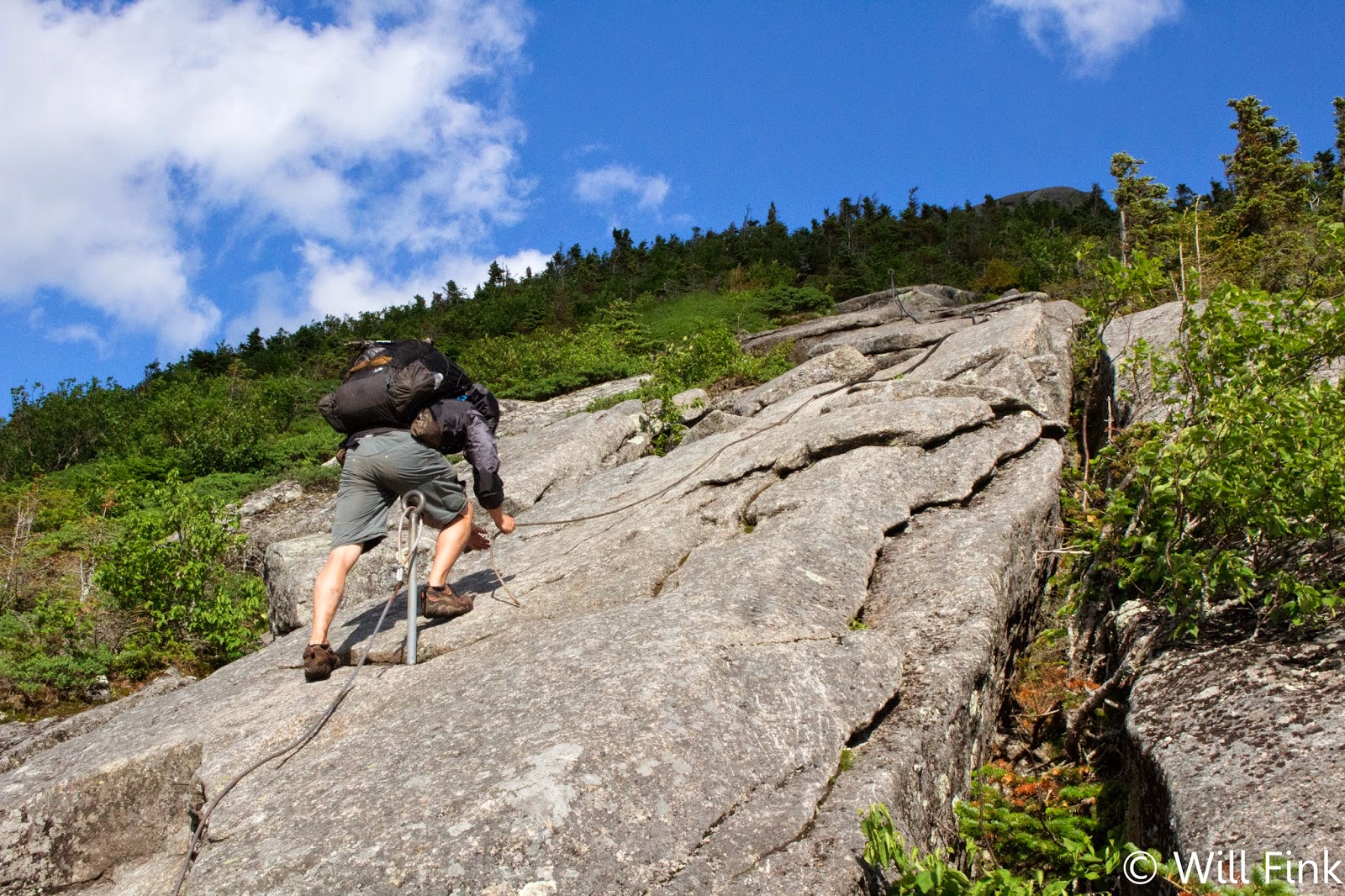 Behind us was a wide and spectacular view of what we had already climbed and the lakes below.  Sweaty and tired, we again waited at the top for everyone to regroup.  Our plan was to get to Wolf Jaws shelter for the night.  This was the last time we regrouped, as we decided to hurry on before we lost all daylight.  Kylie and I took the lead and quickly climbed the next peak - Armstrong.  Less glorious, it was still a cool summit with one side open to the valley.  We pushed on quickly to Upper Wolfjaw, which has a very small summit just barely peaking above the trees. 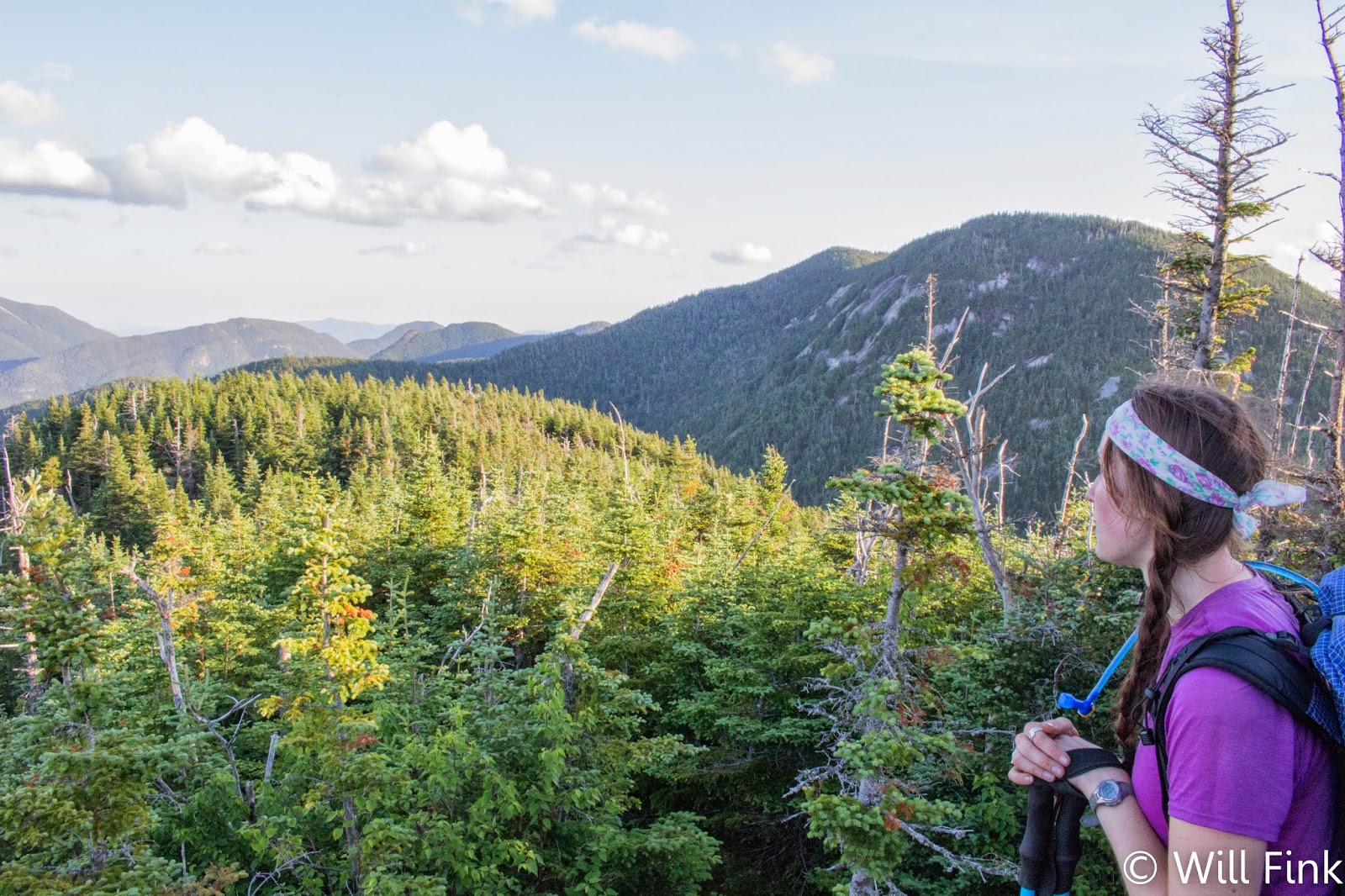 We had a rolling regroup here, before Kylie and I again pushed on to Wolf Jaws shelter.  I was finally feeling good, and was able to get up to cruising speed in this rolling terrain.  There were still challenges, but only 10 per mile instead of 100!  The Nat Geo TI map showed the shelter a little over .6 miles.  Kylie's showed it at about .9.  It turned out to be morel like 1.4.  We made it with the last of the light.  The shelter was full, and campsite half full.  Everyone else rolled in by headlamp, and we all scattered around the site wherever we could.

It took me a full 45 minutes to hang my shelter and tarp!  I was not feeling myself, and normally simple tasks were proving extremely difficult.  Kylie was amused that she had her shelter up, walked back to get water, and eaten before I sat down to start cooking!  I later learned Karan wasn't feeling so hot either.  The day had been hot and hard, and we were all still short on sleep.  We turned in as soon as dinner was done, stashing our bear cans away from camp. 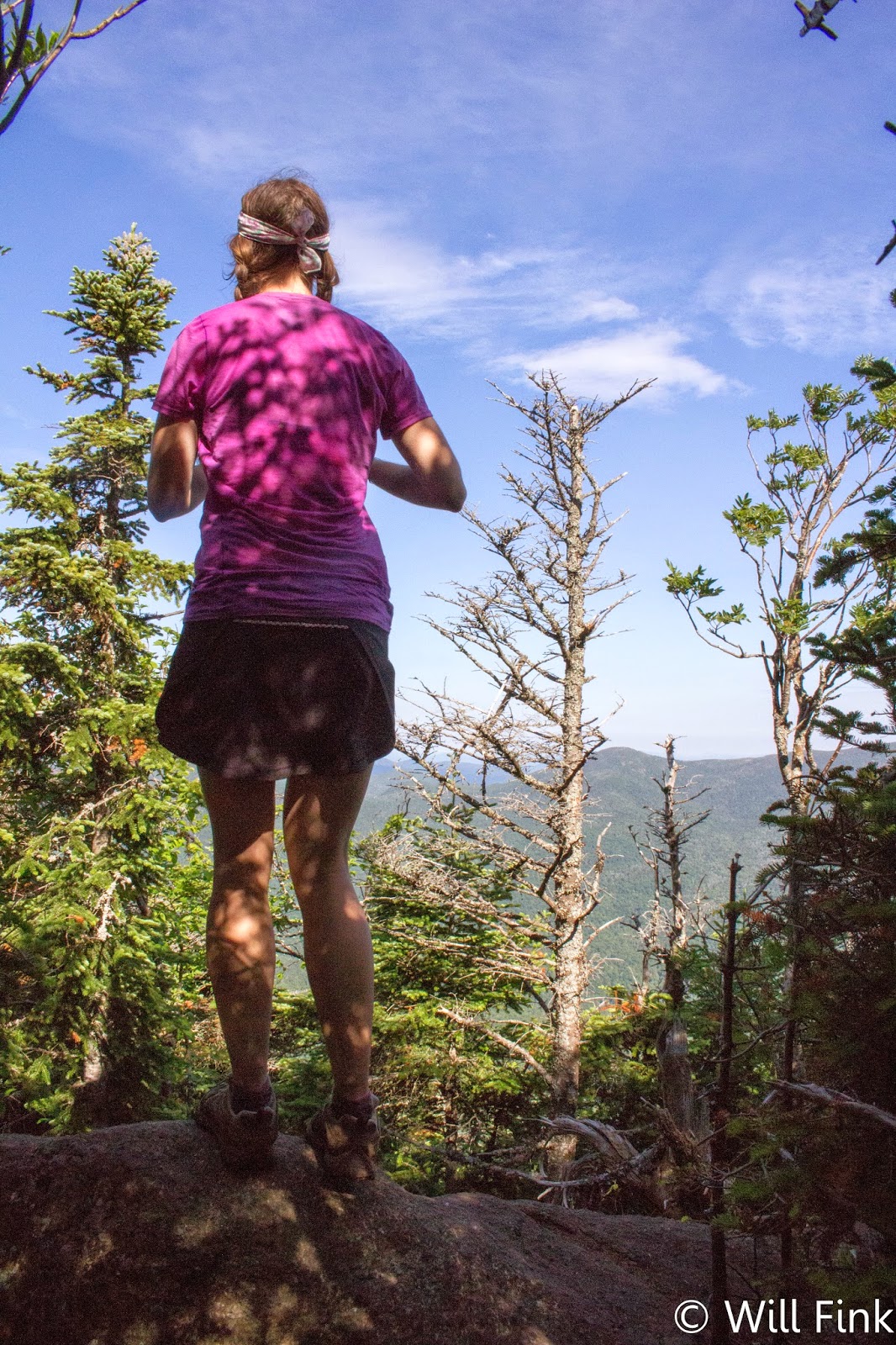 I crawled out of my hammock at 7, feeling much better (though I could have slept longer).  We broke camp quickly, anxious to push out the last 7 miles.  We doubled back south, climbing back to the ridge, then hanging a left towards Lower Wolf Jaw Mtn.  We spread out again, tackling the ever present rock challenges independently for the most part.  Lower Wolfjaw wasn't terribly glorious, with just a small boulder to stand on.  But it was a good spot to cool down from the brutal last .5 mile climb straight up.  I chatted for a minute with a day hiker headed back the way we had come.  I can't remember seeing any backpackers since Marcy the day before.  We didn't tarry long, and blasted on, towards Hedgehog.  We were actually moving so fast, none of us realized we had summitted until half a mile past the peak.  It seemed to be completely tree'd in, with no obvious herd path to any views.
We cruised on.  John, Jimmy and I took the lead - we had the keys and wanted to get the shuttle reversed to save everyone else from waiting too terribly long.  Jimmy called back to Karan - "Take care of the women!".  He waited at the intersection for everyone to catch up.

We crushed the last couple miles in no time.  It's amazing as you get close to the trailhead, how smooth and easy the trail becomes!  We passed a couple climbing up to Rooster Comb, which we had decided to nix for the sake of saving time.  After chatting about what we had just done, they were in complete disbelief.  Apparently our route is rarely tackled - and maybe never backpacked?

We all reunited at the crowded Noon Mark Diner, but decided on lunch at the Inn just up the street.  Good choice!  The food was great (if pricier than the NMD).  After stuffing our faces, and some group photos - we started the long and brutal drive home in holiday Sunday traffic.

Reflecting back, this was easily one of the hardest hikes I have done.  I'm sure starting off with good sleep and being in better shape would have helped - but the climbs and descents were tough, and take their toll no matter what I think.  It felt like a a great accomplishment, that it seems few people (if any?) attempt.  Even the 'standard' Great Travese is no joke.  It's some tough trail to cover.

Check out Jimmy's Trip report over at DCUL Backpacking.