A few weekends ago DCUL launched probably the most varied assault on the Massanutten Mountains in it's history - with 4, well technically 5, separate groups tackling different routes.

I “led” the Meganutten variant, also known as the Sufferfest, the most absurd option. We were out to complete the entirety of the North and South loops. In total, about 112 miles.

I arrived at the Signal Knob parking lot Wednesday morning to find Baconator’s and Macgyver’s cars all by themselves. It was a chilly 28* so I wasted no time in shouldering my pack and setting off after them. 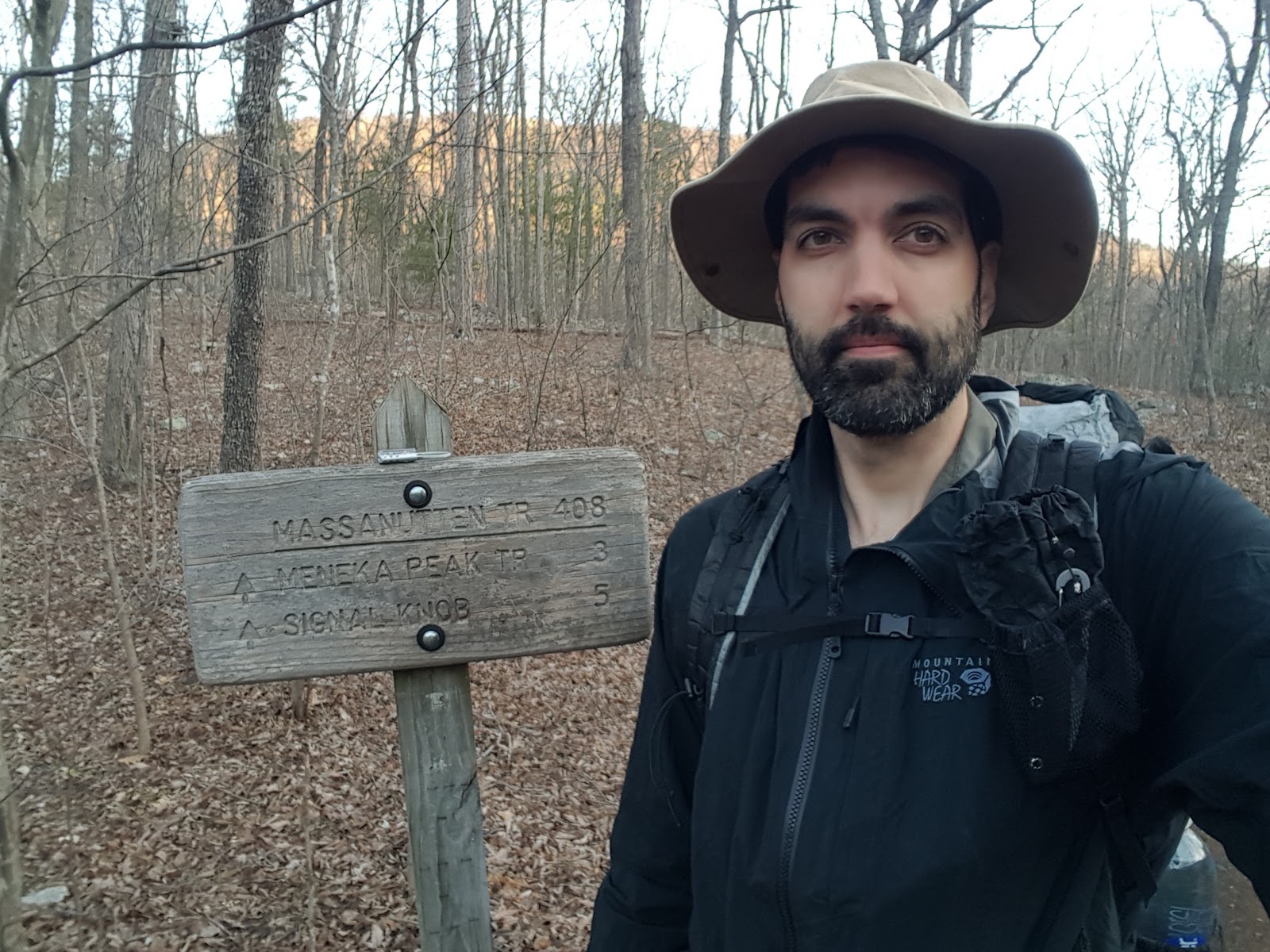 I could finally feel my fingers again by the time I had left Elizabeth furnace in the dust. The first rays of sun hit me as I crested the Ridgeline and hung a right.

Shortly after I found Steve, and we eventually caught up to Sharon a little before hitting Veach Gap. The team was united! 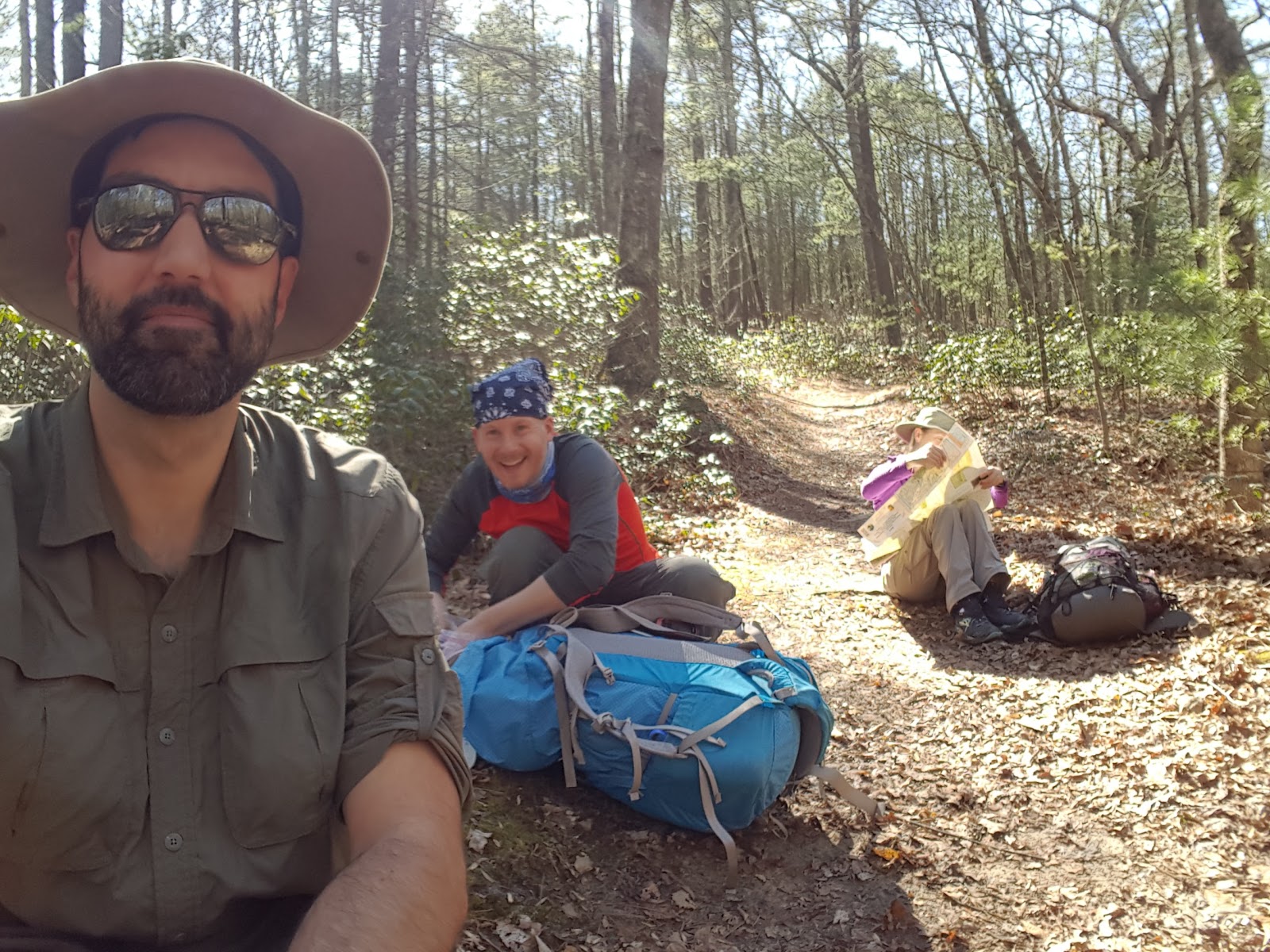 I topped off on water to prepare for the next 12 or so dry miles, then we tackled the climb back to the ridge. After that, it was familiar ridgeline as we pressed south and ever higher.

We swapped the lead a few times, had some snack breaks, took a few snapshots, but mostly kept moving. I went into a trance at some point. I ran dry a few miles short of Edith Gap, and thought I would never get there.

But finally the roadway appeared, I turned right then descended towards Duncan Hollow. I stopped to tank up at the first water source I found, at which point Sharon rocketed past! She rode a surge of adrenaline to camp, arriving at 6pm. I shuffled in soon after. A bit after that, The Baconator appeared. So far, so good!

We were actually a few tenths of a mile short of our intended camp - but no one cared in the slightest. Our collective GPS estimations came out to 28 miles for the day.

As I sat cooking my beans and rice, I noticed I had slung my hammock directly in the kill zone of a widow maker. I gave it a few shoves, and sure enough it wobbled on it's root. Yeah, time to move. 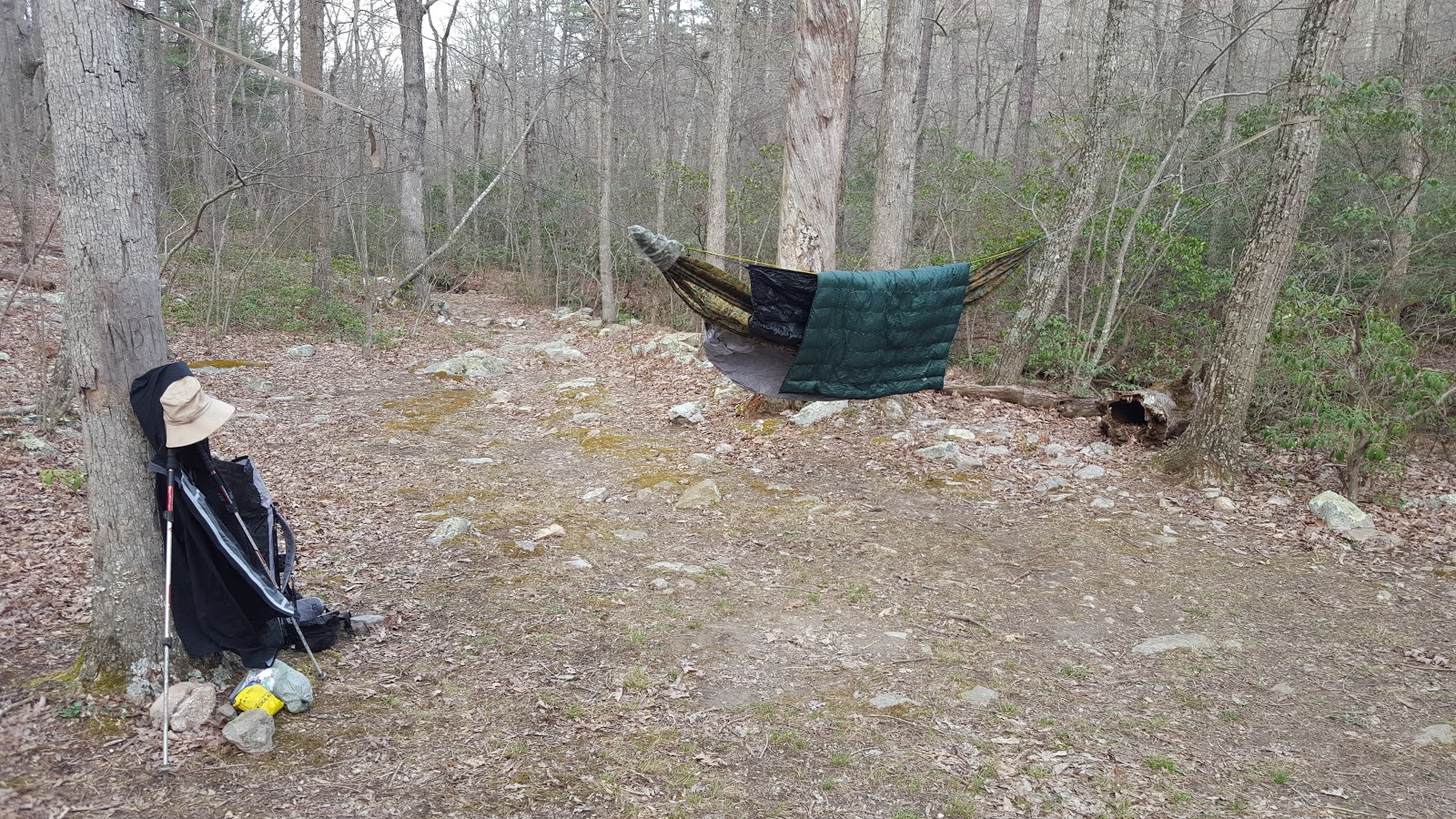 The next day we were up with the dawn, and hit the trail a little after 7am. I slowly got my muscles warmed up during the climb to Strickler Knob, then blew by it with a wave. Hanging a left at the 4 way intersection at Scothorn Gap, I cruised to the Massanutten Connector/Waterfall Mt. intersection. I got some water, my memory being fuzzy on how far the next source would be. 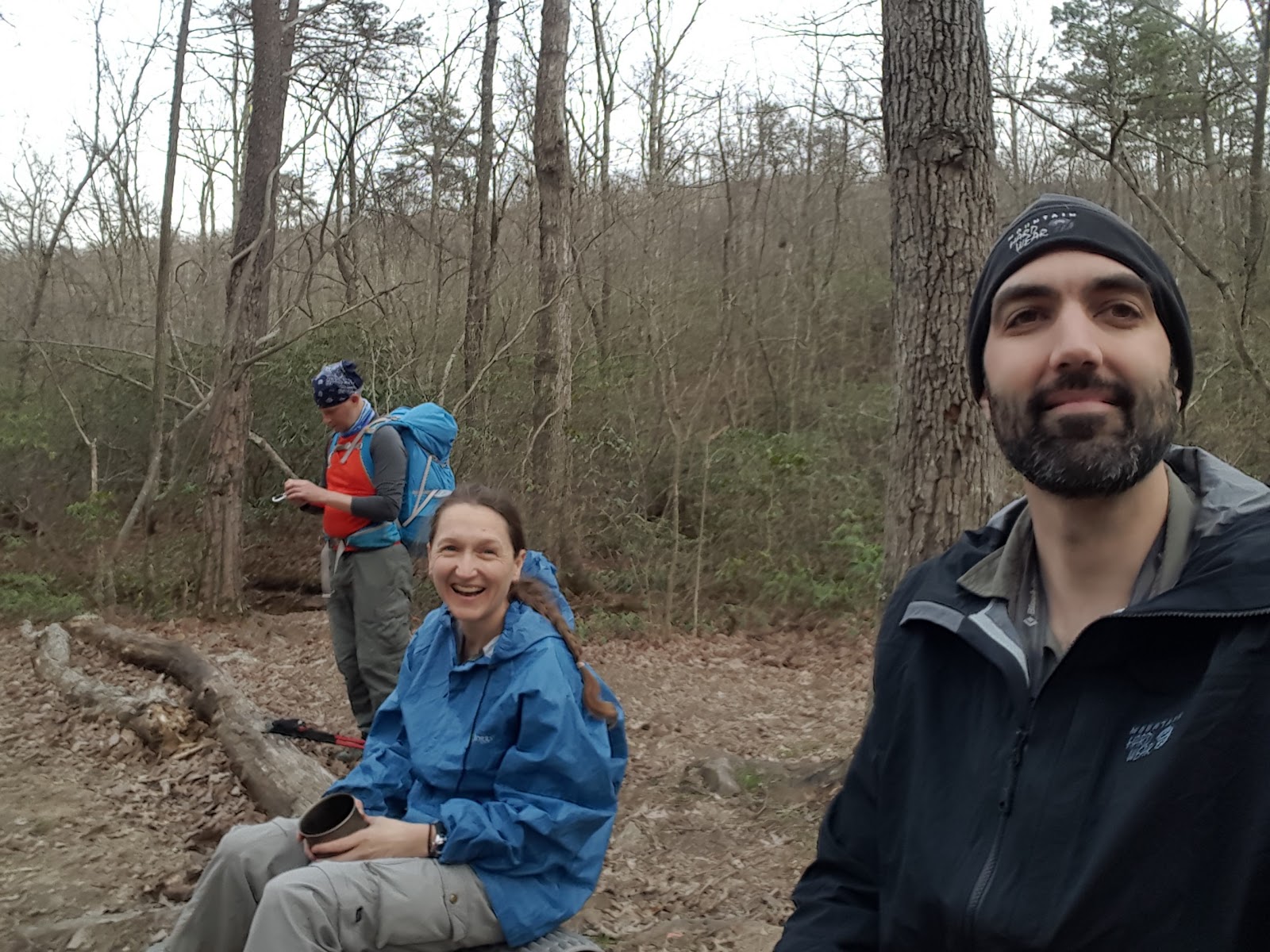 Taking the connecter trail, I arrived at 211 to wait for a regroup. We had a quick pow-wow, then continued on the orange blazed connector trail before turning left on purples blazes.

Up and up we climbed. I looked for the mythical Brown's Hollow switchback, but as none of us could find it I’m finally convinced that - if it ever existed - the brush has reclaimed it. Instead the trail stayed straight all the way up the valley.

Finally, gratefully, I reached the top. Then it was back down again, eventually reaching Catherine Furnace and Cub Run Road.

The first hour into the road walk, I thought, “this isn't as bad as I remember “. Then I remembered. Yes, I still loath - no despise - Cub Run.

But at last it came to an end. Hanging a right then climbing a little ways and Boones Run Shelter appeared. Sharon rolled in not far behind followed by Steve. Everyone was in good shapes and spirits. Another 25ish miles down. 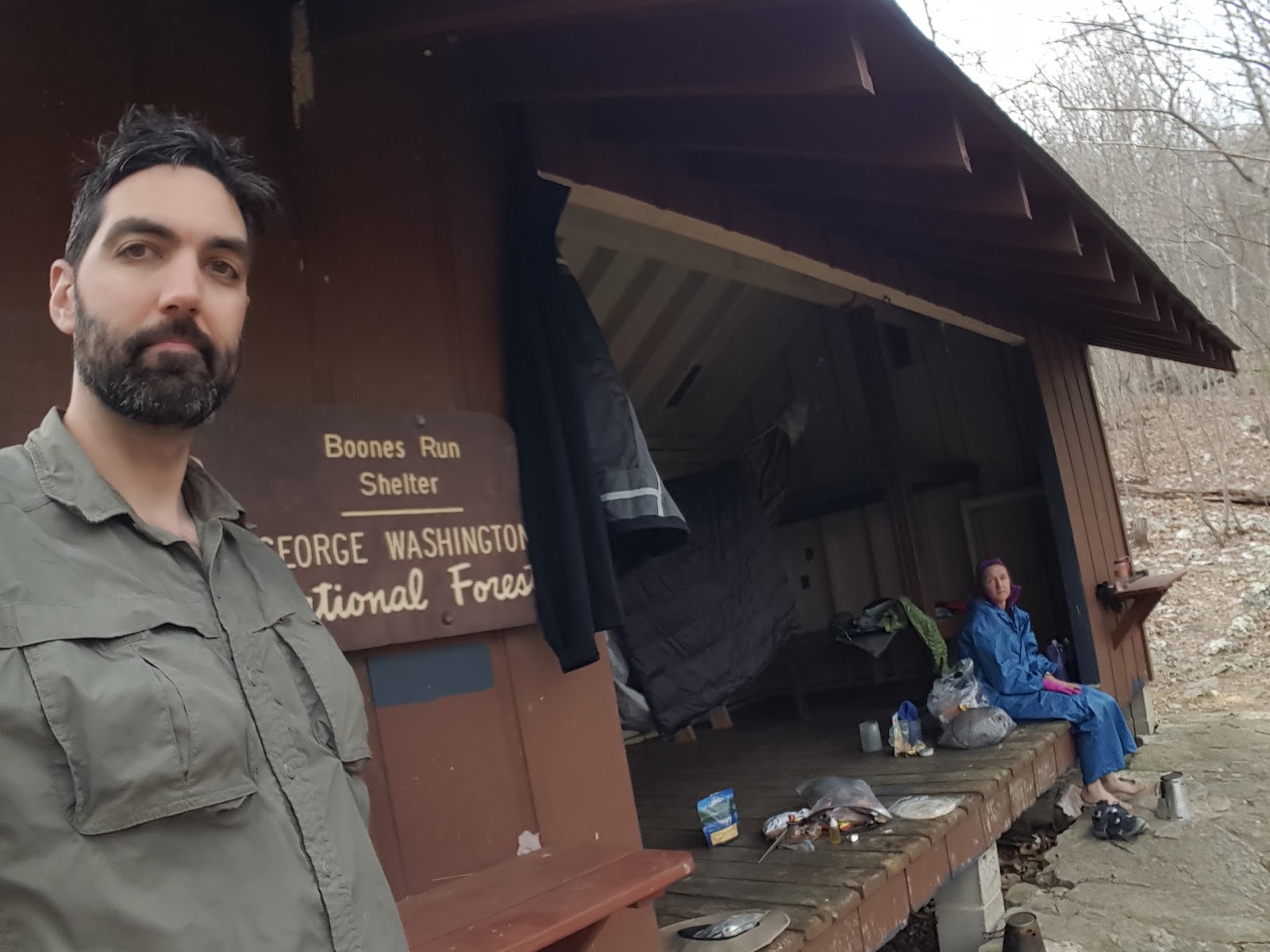 The next day we suited up for the morning start into a light rain. Not far after leaving the shelter, I passed a group of freshly fallen trees and branches. Just as I stepped over them, I heard the unmistakable crack of a tree splintering to my left. I made billy big steps out of there. I looked back 10 seconds later to see a sizable tree crash across the trail. Zoiks.

More climbing ensued. Then some descending. I found a nice spring at the forest road junction that I remember not at all. As I leaned in to fill my bottle, a frog hopped into the pool. Oh well, a little frog crap never hurt anyone.

Next came another never ending road walk that climbed all the way to the ridge. The sun beat down and temps climbed to the 80s. Yeah, I must have mentally suppressed this part the last time I was here.

Finally reaching the top after passing some massive ant mounds, I took a long lunch and foot repair break. Just as I shouldered my pack, Sharon appeared. We snapped some pics at the overlook then descended together to the pavilion, where she peeled off to reapply sunscreen. 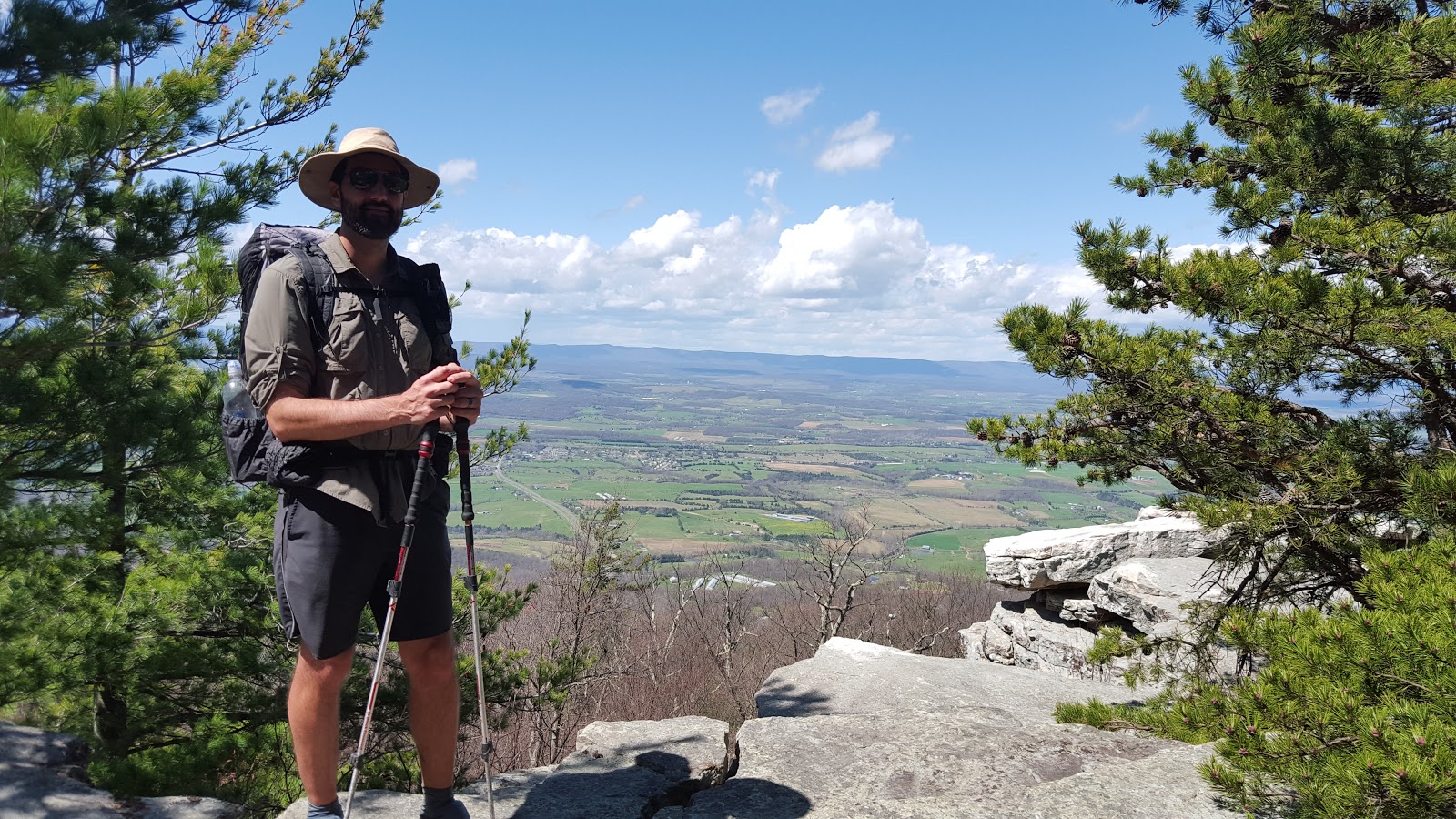 I soldiered on, turning left on the MT Connector, recrossed 211, then climbed back to the main MT junction. Sharon caught back up as I took on 4 liters of water, and cheered me on before going to tank up herself.

Waterfall proved to be every bit as steep as advertised. I was quickly drenched with sweat and received no relief from the sun. I quickly switched to a rest-step, not wanting to stop. My feet burned when I stopped.

I was glad the climb was short, and popped out onto the flat-top as scattered rain began and the temperature dropped. Where was this 30 minutes ago?

I was surprised to find myself alone at the summit campsite, and a little bummed - but soon Sharon summitted as well and GQ and Marika appeared, having driven up Crisman Hollow Rd. to shower us with beverages and treats in the finest display of Trail Magic. I was made happy again.


One by one, the Massanutters appeared, roughly half way through their 71 mile loop. The Baconator appeared in their midst. Huzzah! All the Meganutters had made it! Shortly after, everyone was there, and the two groups were united. Much cheering ensued. 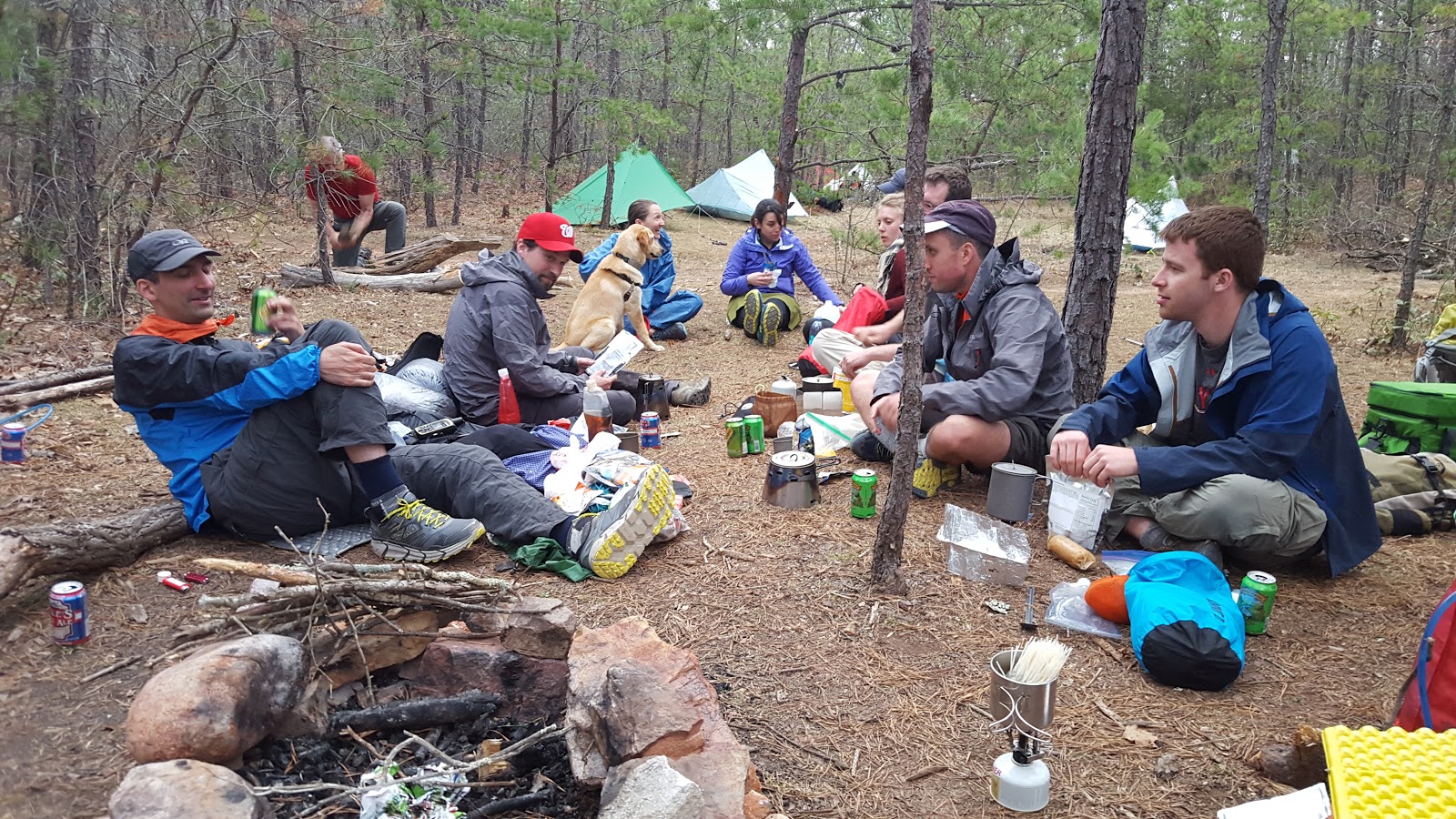 Dave Shook also appeared, and after making a fire, began dispensing hot chocolate and libations. Then, just when we thought we were maxed on trail magic, the Half-assanutters rolled in, also haven driving up Crisman Hollow Road with more bear, sodas, and gatorade. They would join us for the remainder of the journey as well.

We had quite the party again on - which eventually drew the attention of a ranger! He just wanted to be sure the grounds were being respected.

Eventually all drifted off to their shelters and sleep. In the morning we had rain, but it stopped just as it was time to hit the trail. Some hikers scarfed fresh pancakes made by Dave before heading off, myself included. The Baconator abstained from all Trail Magic, showing superhuman will. 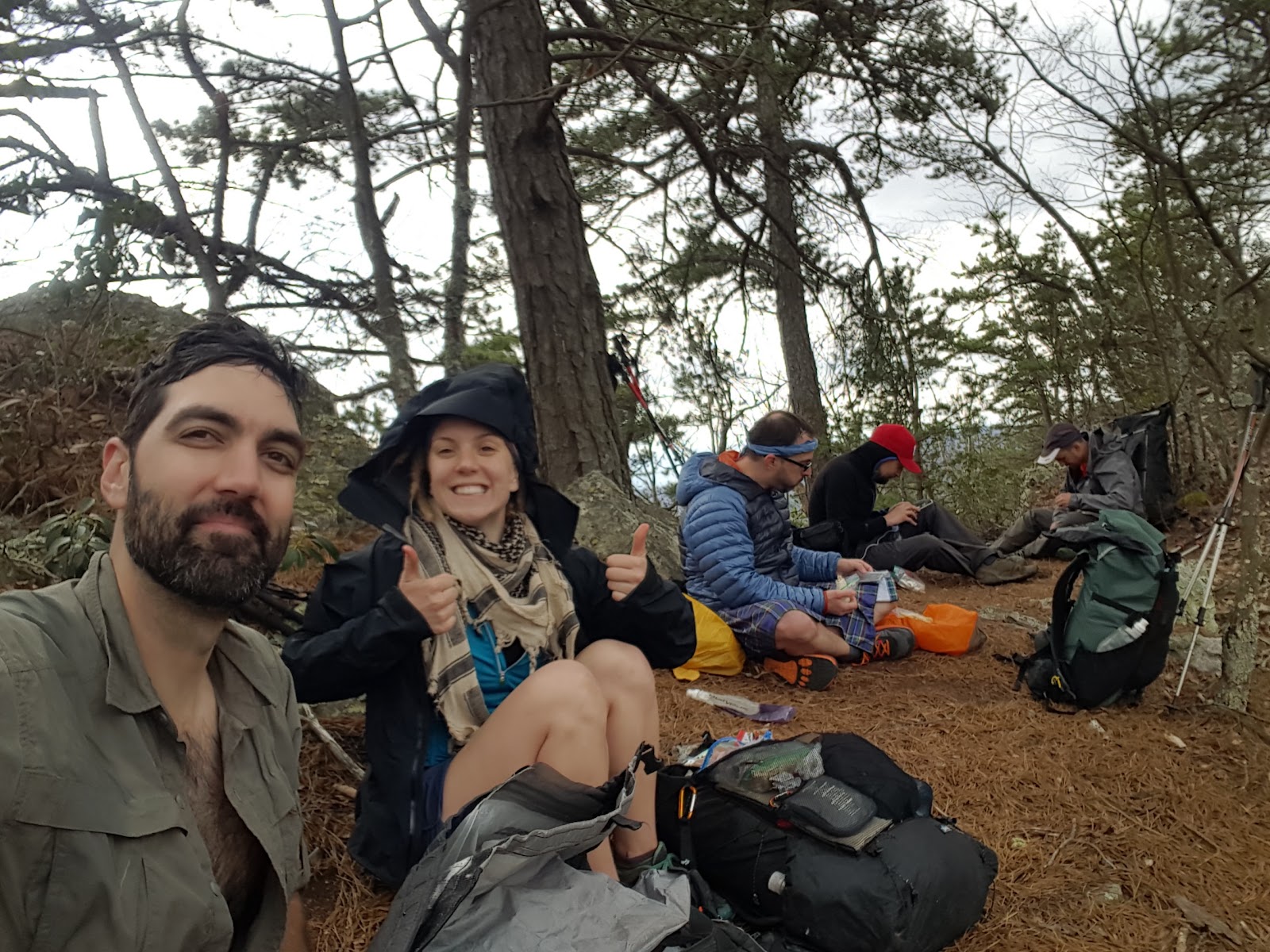 I made a jackrabbit start chasing after Sharon with a mix of Massanutters and Half-assers. After a brunch rest, I decided I’d had enough foot hammering, and moderated my pace. I fell in with Covergirl and Merritt, together we finished Short Mountain and strolled into Edinburgh Gap where Jimmy and Marika met us again for a quick break. U-turn, Whiskey Fairy, and Prius were also there taking a break in the bright sunshine. 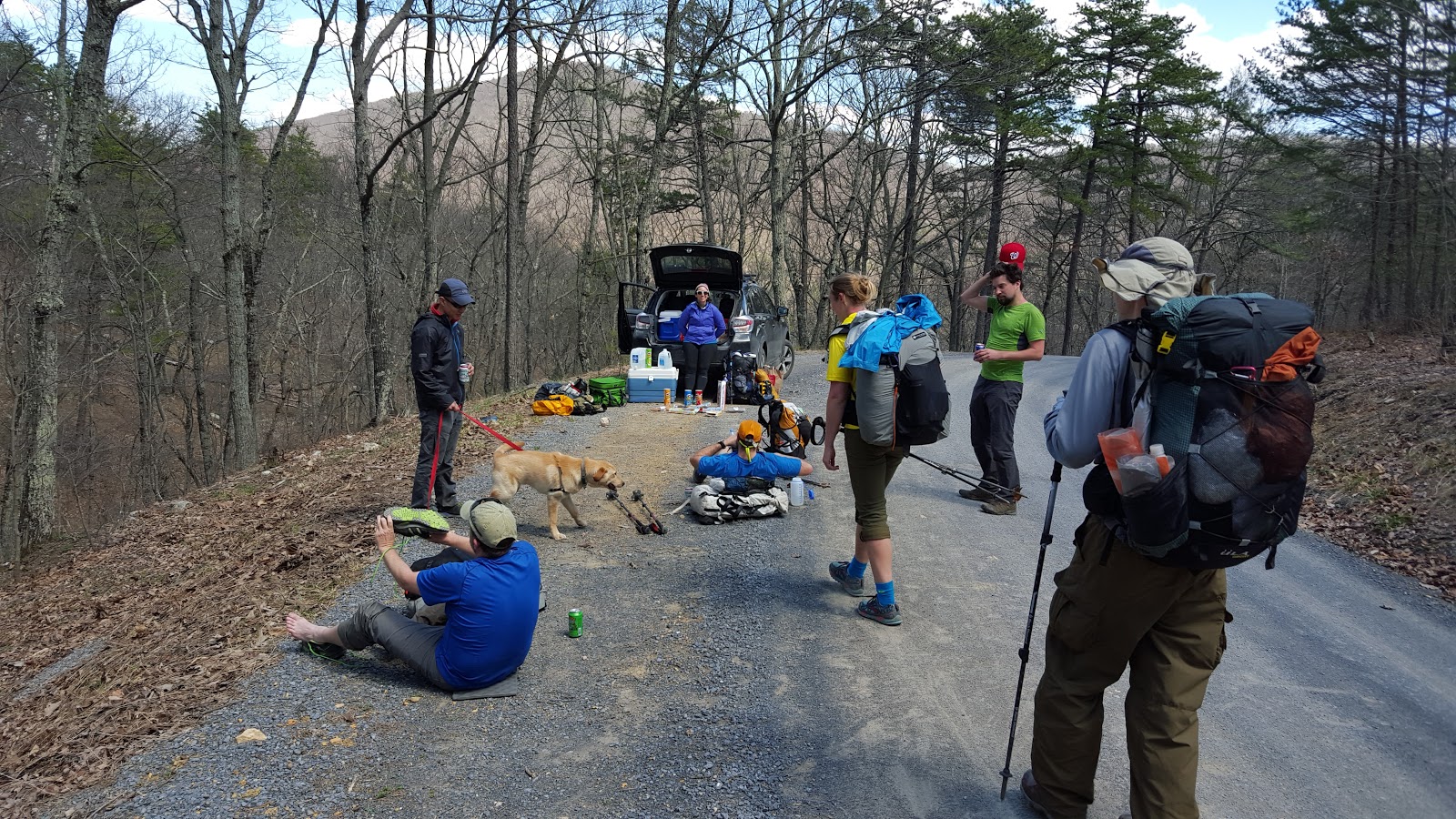 Then it was one more climb, and a never ending ridgewalk to Woodstock Tower. We enjoyed the view over the North Shenandoah for a few minutes, then pressed on. We three initially blew by the turn to camp, only seeing the pink blaze. “U-turn said white blazes!” I thought to myself, but eventually realized where the descent to Little Fort Campground was. 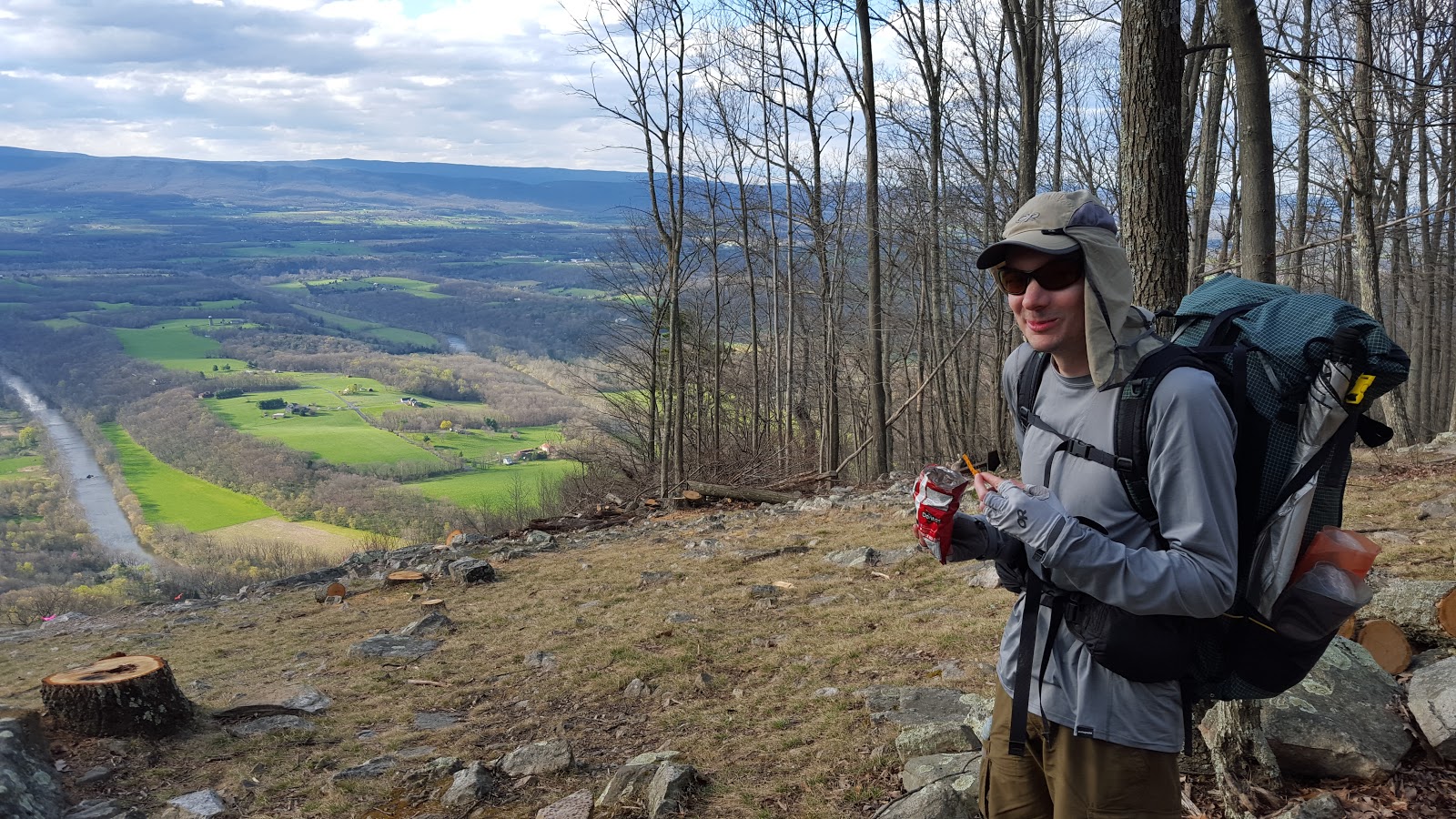 We arrived to find a boisterous sausage-roasting cookout already in progress, which included the the Mini-Nutters! The full-team was assembled! They would bang out the last 14 miles with us, having walking in from Edinburgh Gap. 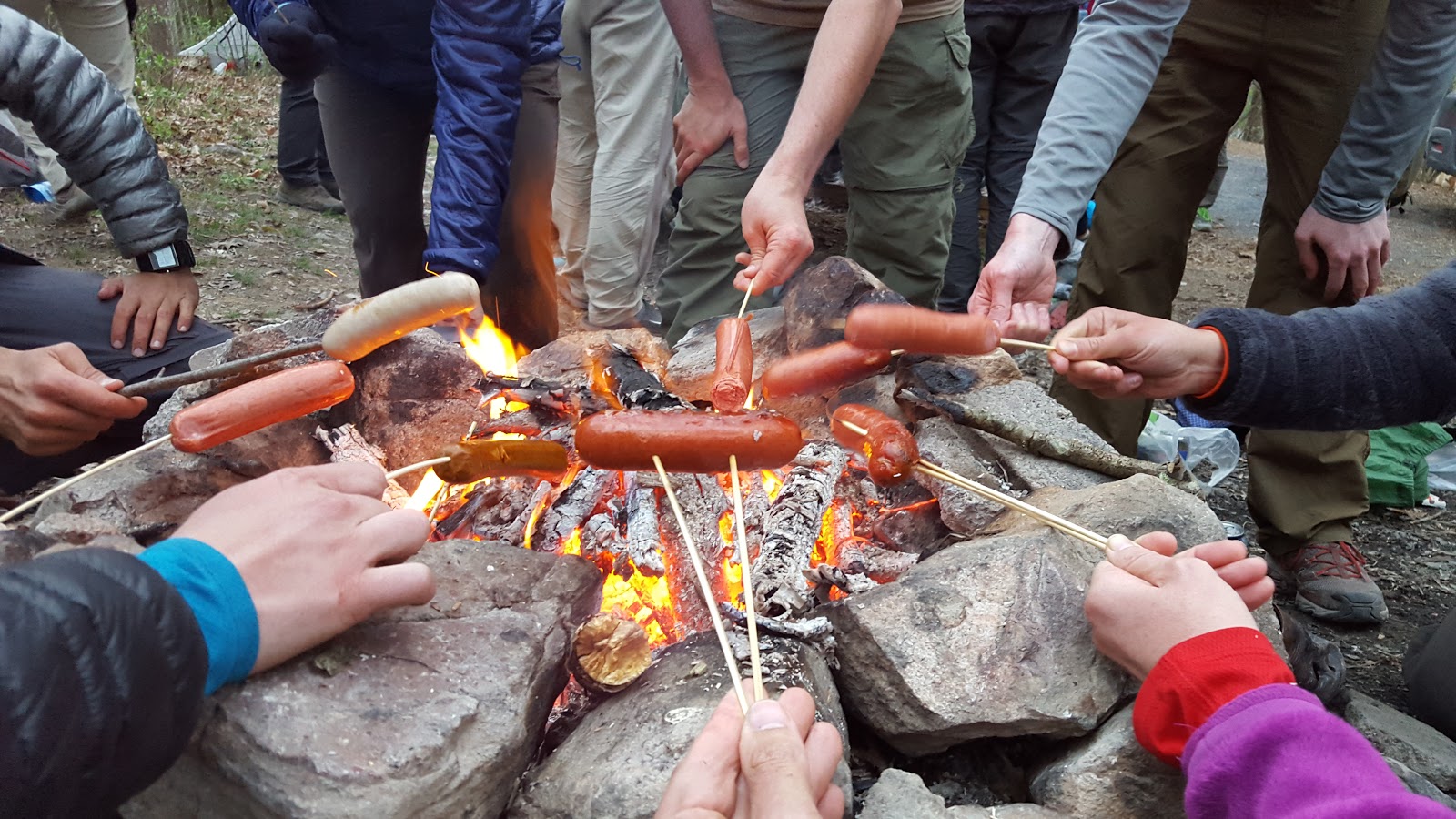 Double entendres abounded. I ended up stuffed from all the trail-magic again and didn’t even touch my beef stroganoff. The merriment went on for quite a while, then everyone retired for the night. Soon rain started. Then things got downright chilly, with wind gusts coming on in force. I woke up to find snow blowing on my face, and covering my shoes. It was a pretty sleepless night.

At the first glimmer of dawn breaking, I pounded breakfast and broke camp. Alison was also ready to go and we headed off. We ran into U-turn on the climb out of Fort Valley. He’d also had a cold sleepless night.. There were even more fresh prints in front of us. We later learned that Sharon and Sophie had been chilled as well and blazed out of camp at 5am. Evan had also gotten an early jump and was miles ahead. 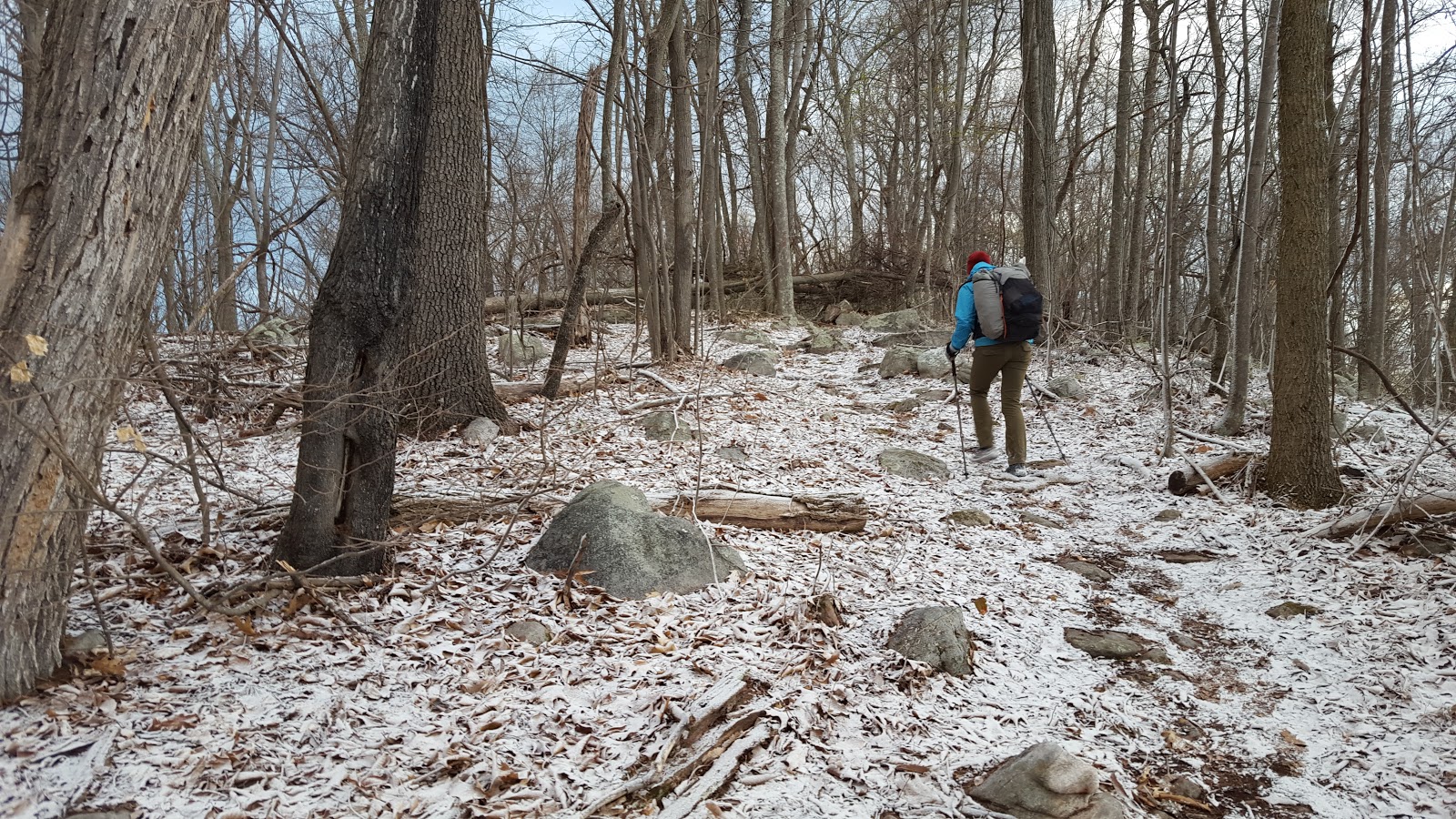 Once on the ridge we were blasted by wind from our left. It persisted all morning chilling us down as we hiked through the dusting of snow. There was a great sunrise on the right right, but it was a bit cold to stand around and enjoy it. Eventually we dropped down on the lee side of the ridge, hitting the road. A few people passed us as we got some water, including Eeyore, B.A., and Face Plant. 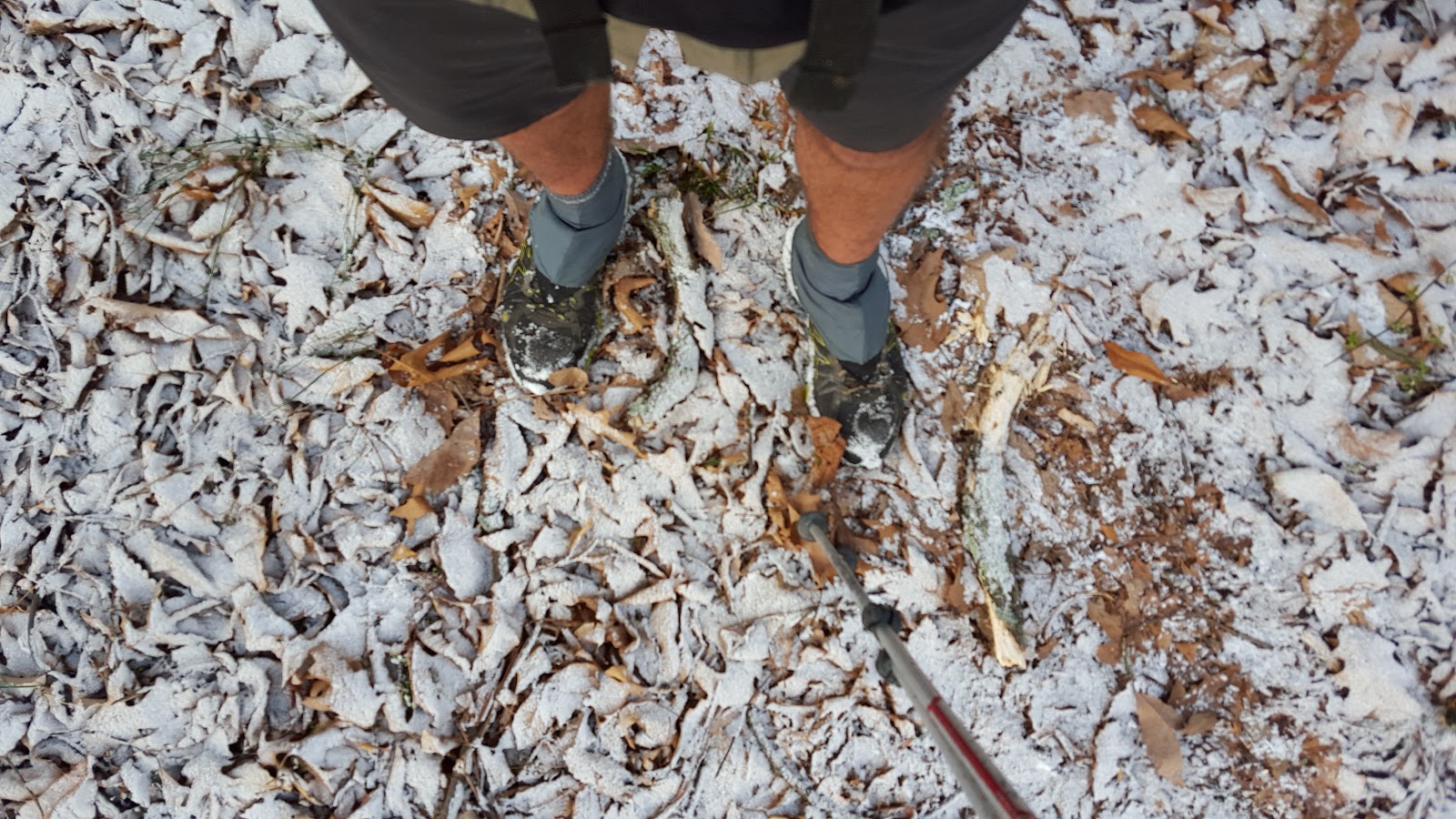 We turned left and started climbing as Radiance and Doc joined us. We hit Signal Knob, had a victory dance and pictures. It was Home Stretch Time. The Baconator and U-turn joined us. We pressed on. We ran into Jimmy and Hayden who had climbed up from the parking lot to meet us, together we descended and hit the fractured, rocky section of trail that would take us back to the trailhead. 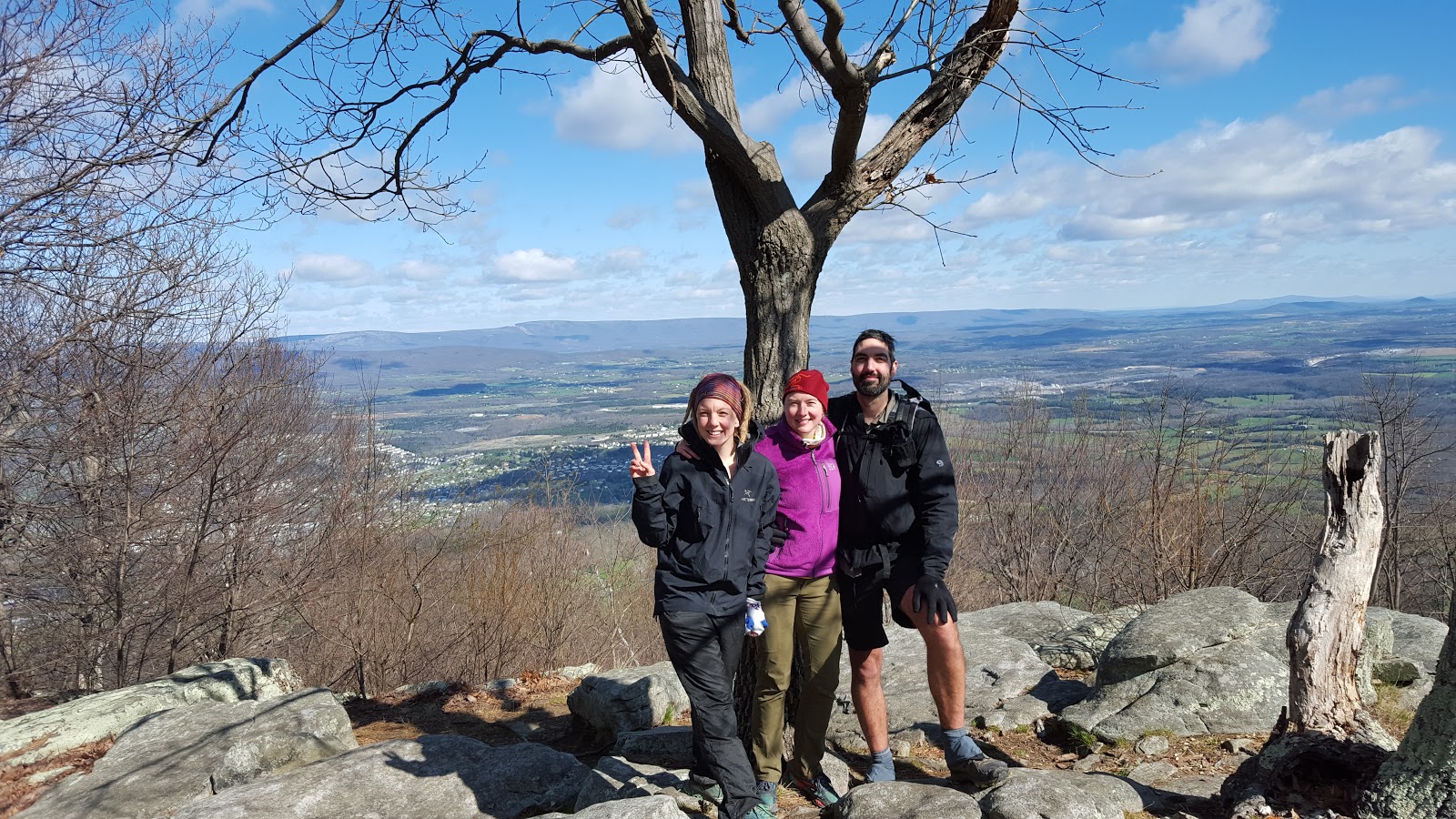 Just when my feet had had enough, salvation appeared in the form of the Signal Knob parking lot. We had victory photos and a rolling reunion as one by one, DCULers appeared at the trailhead.

Then it was off to Jalesco’s for much deserved chow. 112ish miles done! 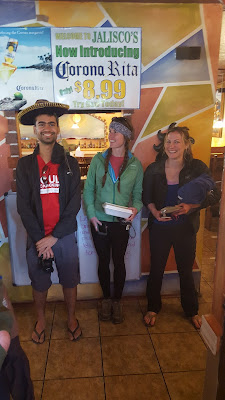 For a Sufferfest, the suffering was actually quite minimal - much of the trail was enjoyable, and the company throughout was top-notch. Having multiple groups joining in as the adventure continued was a fun twist. Major kudos to all who participated!

But damn you, Cub Run Road.

Posted by Savage at 7:33 AM No comments: